OPEC (the Organization of Petroleum Exporting Countries) would like to keep the price of oil up. One way is to cut production.

But it has not always worked out. The reason will take us to the U.S. China trade war and the Prisoner’s Dilemma.

To diminish oil production, OPEC tells each of its 14 members how much to produce. However, what is good for a country is not necessarily best for the group. After all, individual nations would like to optimize oil revenue by selling more oil. But they need to ignore that incentive when told to reduce production. Sometimes though, when the temptation is too great, members exceed their quotas or refuse to agree on any during an OPEC meeting.

The trade war between the U.S. and China is also about the conflict between group and individual benefits. Both countries benefit from more trade and no tariffs. Instead, the policy has been retaliation.

The Peterson Institute groups the tariffs into four stages:

Whereas U.S. tariffs averaged 12 percent just before mid-June 2019, they could almost double by the end of this year. You can see below that recently the increases have been steep: 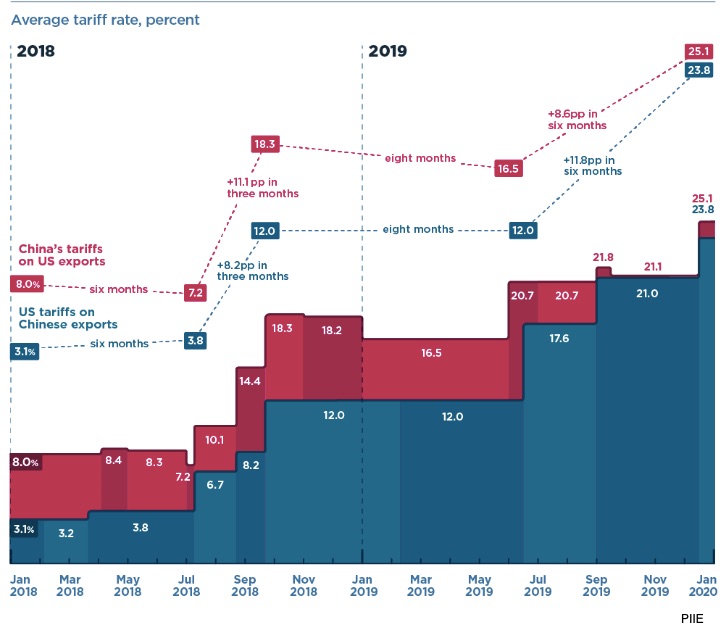 And the OECD (Organization for Economic Cooperation and Development) tells us that no one will benefit. While their 2016 report theorizes that growth will shrink by somewhere between 1.7 to 2.2 percent, the Financial Times quotes others that suspect the impact will be considerably more: 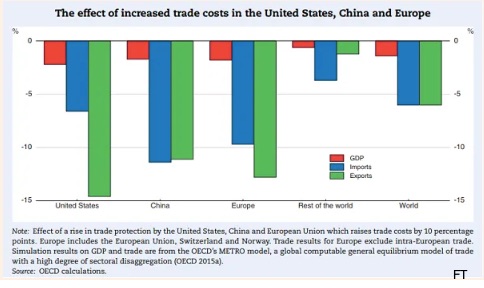 Our Bottom Line: The Prisoners’ Dilemma

The Prisoners’ Dilemma explains OPEC and U.S. China behavior. It tells us why we tend to focus on our opponent when we negotiate instead of selecting mutually beneficial cooperation.

Please imagine for a moment two recently arrested burglars who were separated at the police station. Each was told that a confession could result in no jail time…but only if the other prisoner does not confess. However, if both don’t confess, then they each get 6 months.

For each one, the “dominant strategy” is confessing because it guarantees less jail time, no matter what the other prisoner does. However, if they were able to cooperate and depend on each one sticking to the deal, then not confessing is optimal:

In our prison example, for OPEC, and with the trade war, what is good for the group is not necessarily the individual’s “dominant strategy.” And that is why OPEC nations don’t necessarily listen to production quotas and the U.S. and China continue raising tariffs. Each one’s dominant strategy relates to their opponents rather than the benefits of cooperation.

My sources and more: I thank my students for inspiring this post. Our discussion took me to FT and to my go-to website for trade facts, the Peterson Institute. Then for trade war impact estimates, this World Bank report and the OECD are possibilities.

How the Economy Affects Our Vote