This year’s NYC Marathon winner, Geoffrey Kamworor, was wearing Vaporflys. Nike says its Vaporflys give runners as much as a 4 percent boost.

Where are we going? To capital and innovation.

Our story starts in 2017. The place is Monza, Italy, and the person is Eliud Kipchoge.

Two years ago, long distance runner Eliud Kipchoge attempted a less-than-2-hour marathon in his Vaporflys. He was close. Then, at the 2018 Berlin Marathon, his 2:01:39 became the official record. Last month though might have been the turning point. At Vienna’s INEOS Challenge, unofficially, his time was 1:59:40. At the NYC Marathon, winner Geoffrey Kamworor’s time was 2:08:13. (Kipchoge was not in the race.)

Running analysts are not sure why the Vaporflys seem to increase productivity. It could be that they are lighter. It might be the carbon fiber plate. As economists, we can say that innovation has upgraded a runner’s capital.

This is a design image that Nike submitted to the U.S. Patent and Trademark Office. Not exactly the released Vaporfly, Runner’s World says it had “a segmented sole, three plates (likely carbon fiber), and up to four fluid-filled chambers,” and was similar to the shoe worn by Kipchoge in Vienna: 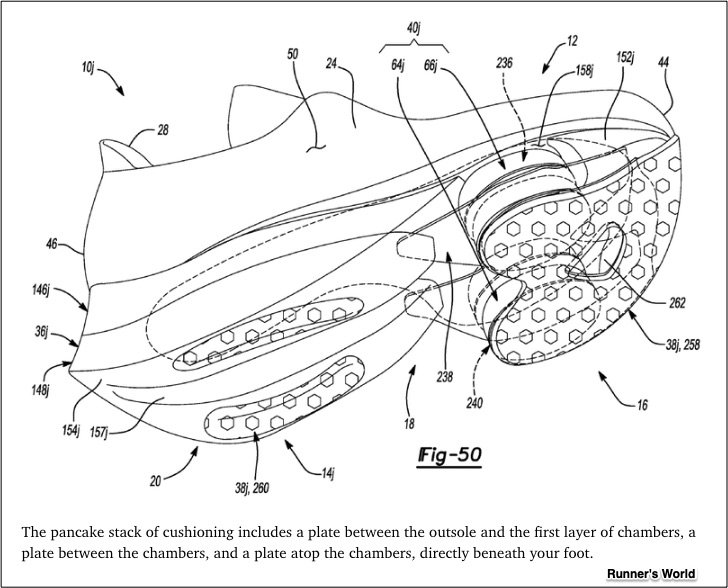 From runners, let’s take the leap to United States productivity. The U.S., though, has been trending downward.

Below, labor productivity is graphed from two perspectives. When we compare labor input to output for the year, the increase is down to 1.4 percent. At -.3 percent, the quarterly change (annualized) is even worse.

You can see that the trend is down for labor productivity: 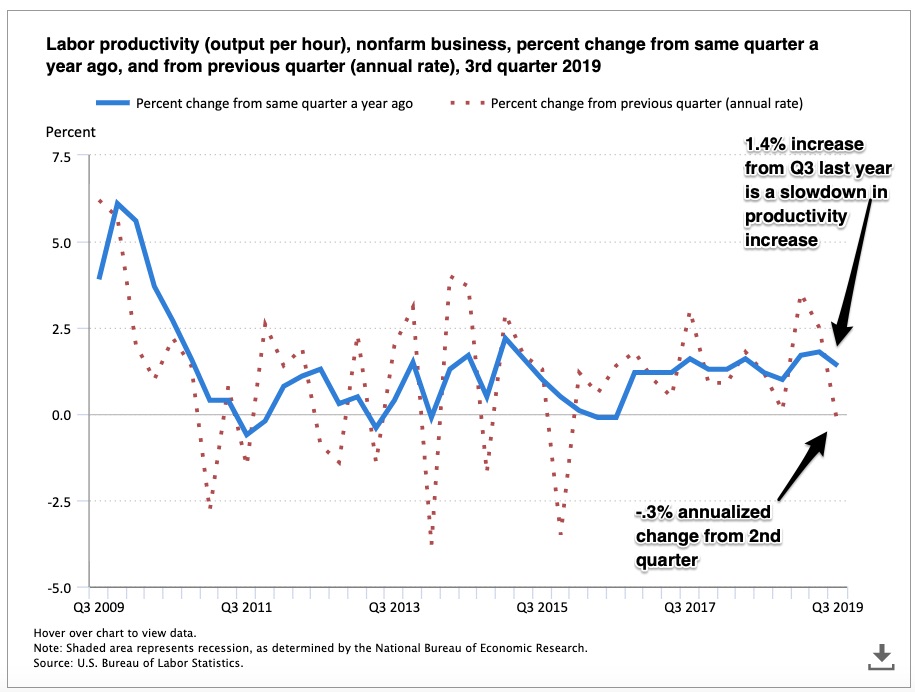 Several years ago we looked at why.

Calling it a productivity mystery, we considered capital. Defined as the tools, equipment and inventory that we use to make goods and services, our capital stock has been growing more slowly. Less of a boost in capital can mean a decline in the growth of output.

Or we could have an innovation pullback. Whether from less entrepreneurial zeal or a dearth of new technology, the problem could be creativity. A University of Maryland economist says that since the 1980s we’ve had insufficient “creative destruction” through which firms die and more successful start-ups ascend. To that we could add economist Tyler Cowen’s hypothesis in The Great Stagnation that, having picked all of the low hanging fruit, innovation has plateaued.

Returning to where we began, a sneaker could be showing us what capital and  innovation can achieve.

My sources and more: I just subscribed to Vox’s Reset podcast and enjoyed their look at the Vaporfly. Taking the next step, I went to Runner’s World, here and here, and then BusinessInsider continued the story with Eliud Kipchoge’s records. Finally, also looking at labor and capital, WSJ has some analysis about the U.S. productivity slowdown.

Eliud Kipchoge is our featured image.

The Problem With Picking Peppers