Dongguan is much quieter than last year. To see firsthand, you just need to go to a factory that makes doggie poop bags.

The Dongguan Fangjie Printing and Packaging Company produces plastic bags for detergent, candy, and doggie poop. More precisely, as they expressed it, they make 15 kinds of doggie doo-dah bags.

Double digit tariffs are affecting Chinese manufacturers like Fangjie. When an NPR reporter visited them, she saw idle machinery. When she looked at the city, she saw empty food stalls whose owners said their business had sunk so much that they might have to shut down.

The slowdown though had begun before the trade war accelerated. Caused by rising wages, an aging workforce, and over-reliance on manufacturing, China’s lower growth rate reflected ongoing economic changes. Tariffs were another nudge that moved them in the same direction.

Now, as China becomes a more expensive place to manufacture goods like plastic bags, U.S. companies are investigating alternatives. One group that connected U.S. vendors with Chinese manufacturers had been called ChinaSavvy. Because they’ve begun doing business in places like Vietnam (where workers make one-third of the Chinese wage), they call themselves Omnidex. Vietnam, however, does not have anything close to China’s manufacturing capacity. 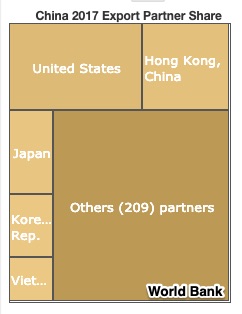 Looking at Vietnam’s exports, we see that the U.S. receives a large proportion: 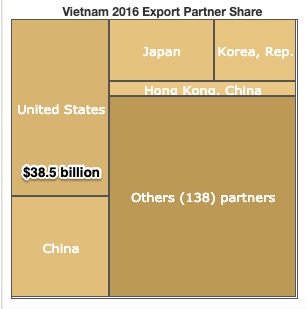 But Vietnam is not near the top when we look where the U.S. gets its imports: 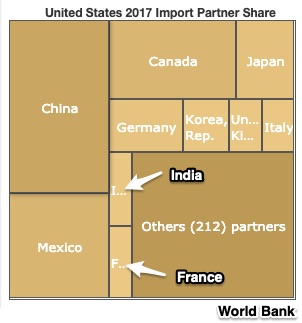 The economist who first explained comparative advantage, David Ricardo (1772-1823) said each nation should make the goods and services for which it has the lower opportunity cost and import what it does not produce. Because of those imports, consumers would enjoy lower prices and more variety. Benefitting also, exporters have larger markets that supported the efficiencies of economies of scale.

If he were here now, David Ricardo would say that the shift away from China is all about comparative advantage. It’s why our doggie doo-dah bags might soon come from Vietnam.

My sources and more: Driving home yesterday, I heard the NPR China story and knew I wanted to share it with you. From there, the WITS data site at worldbank.org was ideal.

Our featured image is from Pixabay. Please note also that this post was slightly edited after publication to improve its clarity.

Why We Waste Healthcare Spending

Our Weekly Economic News Roundup: From Healthcare to Happy Hour