Why NYC Could Have a (Small) Baby Boom in Nine Months

This past Saturday, at Madison Square Garden, Jennifer Lopez had just begun her fourth song when the lights went out. Quickly realizing it was not a part of the show, fans evacuated after a backup generator kicked in.

The problem was a power outage that struck the west side of New York City. Starting at 6:47 p.m. and ending at midnight when power was fully restored, the blackout extended from 40th to 72nd Street and 5th avenue west to 12th near the Hudson River: 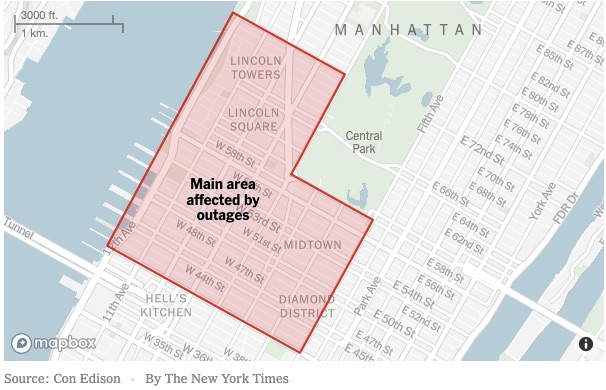 With their systems down, restaurants asked for cash or a promise to pay from their patrons. They had to cope with canceled reservations on what should have been a busy July evening. Meanwhile, elevators were stuck and subways stopped. On Broadway, actors were singing on the sidewalks after their shows were canceled.

In the past, economists have connected blackouts and fertility, So let’s take a look.

The yearlong rolling blackouts that Colombia experienced during 1992 produced birth rate data that is statistically significant. Compared to 2005, the average woman, aged 15 to 30, had a 4% greater chance of giving birth in 1992. Researchers therefore concluded that 27,000 additional children were born.

During four weeks in 2008, sections of the island of Zanzibar lost electricity. There were no lights and no TV. At home, people had more leisure time. Because parts of the island kept their power, a University of Oregon economist was able to compare fertility rates between those who did and did not have electricity. The data indicated that those without electricity had a 17% higher birth rate.

We do not have statistical confirmation that New York had a higher birth rate nine months after the November, 1965 and the July 1977 blackouts. Newspapers did report the spike but then the numbers were questioned. From what I could discover, no one is sure.

In one letter to the editor, a reader said,

The U.S. Atlantic and Gulf Coasts

Looking at storm severity and fertility in the Atlantic and Gulf coasts, economists observed an inverse relationship. They concluded that less threatening storm advisory levels boosted the birth rate while a more severe hurricane warning had the opposite effect. As one economist commented, “If the lights and the T.V. are out, it kind of sets the table for romance . . . But, if you’re running for your life, you can’t make babies.”

However, the impact also depended on family size. Couples with at least one child were more likely to create another one because of a storm while those without children were not.

Although the conclusions about disaster babies vary, I wonder if the economic concept of elasticity can provide some insight. Related to demand, elasticity just indicates how much more or less we would buy when price changes. If a price change generates a proportionally large rise or fall, then our demand is elastic. If the change is minimal, then we have inelasticity.

Because couples with at least one child were most likely to add to their family size after a mild storm advisory (or maybe a blackout), we could say their baby creation was elastic. Our example of inelasticity could be the childless couples that, experiencing the same storm warnings, do not increase projected family size.

So, returning to where we began, will this weekend’s blackout have an impact on the birth rate? An economist might suggest that we look at demand elasticity.

My sources and more: For the story of NYC’s recent blackout, you might want to look at the NY Times. And then, for some analyses of blackout babies, this NJ news article is somewhat skeptical but this report from three scholars at LSE has confirming evidence. In addition, I recommend this Zanzibar study and this academic paper on hurricanes. However, for the best read, do go to Mashable’s report on disaster babies.

Parts of this post were previously published in a past econlife.

Why We All Need the Same Time

Why Tariff Revenue Is Peanuts