Our story begins in lower Manhattan during October 1907.

Anxious depositors could be seen camping overnight as they waited for the banks to open. Stuck for hours, they got food from friends and numbers from the police to establish their place in line. Meanwhile bank tellers were told to count out the money very, very slowly.

A failed attempt to corner the shares of United Copper had started the problems. When the news spread, depositors rushed to withdraw their money from the Knickerbocker Trust because it had provided funding for the disastrous maneuver. Fearing the bank’s insolvency, they hastened it by trying to withdraw more than the bank could give them. Soon, the fear moved beyond Knickerbocker to more banks and to less industrial production.

A good solution did not exist. The Knickerbocker and other ailing financial institutions had no way to get a cash infusion from the banks that were healthy because there was no central authority that connected them. There was only J.P. Morgan. As a banking superpower, he gathered the resources that ended the panic.

The next part of our story takes place three years later.

At an elite and inaccessible club in Georgia, six leading financiers and bankers secretly met during November 1910. They were even told to arrive separately at a private train in NJ that took them to more than a week of non-stop work.

The club where they met: 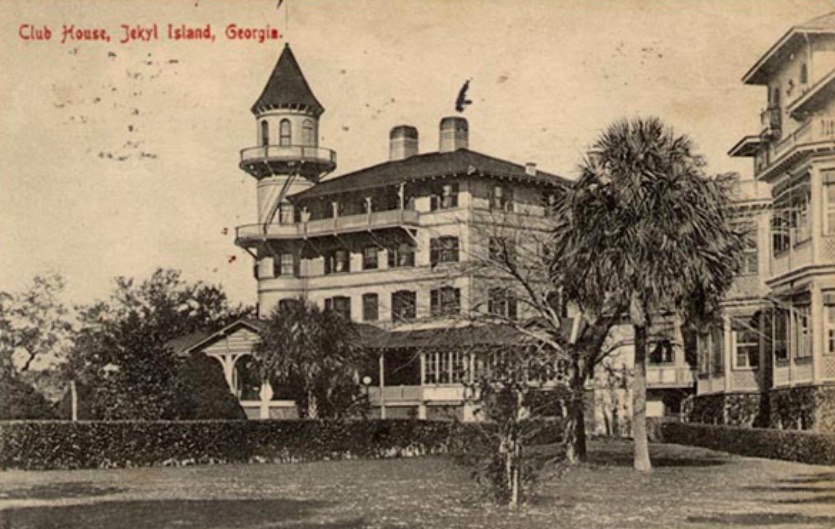 Knowing panics could be controlled by a nationwide banking system, the Jekyll Island group sought to create one. Their goal was an elastic currency and a system of interest rates that could respond to financial crises. The result was a proposal that was passed by the Congress and signed by President Wilson during December 1913. It became the Federal Reserve System.

Six Facts About the Federal Reserve

1. The Federal Reserve is a central bank.

Its main job is to regulate the U.S. supply of money and credit. As an independent agency within the federal government, the Fed is protected from political influence. So yes, the President with the “advice and consent” of the Senate appoints the Chair of the Federal Reserve for a four-year term. Afterwards though, that Chair (with the other Fed officials) independently makes monetary policy decisions.

2. The Fed’s structure extends around the United States.

Although its home is in Washington D.C., the Fed is composed of 12 regional banks. Each one keeps an eye on its own location. In addition, the NY Fed plays a special role as the place that implements FOMC (Federal Open Market Committee) decisions. It’s the job of the FOMC to oversee the securities that the Fed buys and sells.

3. When it buys and sells securities, the Fed targets the interest rates that influence economic activity.

I tell my class “buy/boost” and “sell/sink.” By buying securities like Treasury bills from banks, businesses, and governments, the Fed tries to increase the money supply and lower interest rates. Oversimplifying, we can just say those purchases place money in the sellers’ bank accounts. Then the banks have more money and rates can drop. When the Fed sells securities to the private sector and governments, then the Fed gets the money and the banks have less.

The Federal Reserve is supposed to maintain low inflation, low unemployment, and healthy economic growth. If the Fed is concerned about unemployment and slow growth then it lowers interest rates. To end the Great Recession, the Fed resorted to Quantitative Easing through which it flooded the banks with money from purchased securities. However, when inflation is a threat and the price level could rise too much (2% or so has been a target), then the Fed needs its sell/sink policy tools. You can see that the two policy tools are contradictory. The former propels the economy while the latter constrains it.

A former head of the Fed said, “The Federal Reserve… is in the position of the chaperone who has ordered the punch bowl removed just when the party was really warming up.” Because this Fed role involves precautionary action that prevents excessive inflation, politicians, consumers, and businesses are rarely happy. They don’t like higher rates that could slow economic exuberance.

When rates started skyrocketing in 1980, they were supposed to attack 13.5% inflation. You can see below how the rhythm of rates parallels the onset and disappearance of recessions:

The supply of money and credit and the nation’s production of goods and services relate to each other. It’s like Goldilocks. The country needs the right amount of money and credit for whatever it produces. When there is too much money and credit, we have inflation. Too little, and we wind up with a recession. Just right, and the economy functions smoothly.

Monetary policy is just one half of the picture. We also have the taxes, spending, and borrowing that the President and the Congress control.  Like monetary policy, taxes and spending can also affect inflation and employment.

My sources and more:  BusinessInsider had a good explanation that goes beyond the Fed basics I’ve presented. In addition, I recommend going to the Federal Reserve for some history and the St. Louis Fed for more about the punch bowl (our featured image).

All You Need to Know About a NASA Shutdown