The Pitch That’s An Airline Problem

For a weekend visit to my daughter, I just flew down to Florida on a jetBlue Embraer 190, The fare was cheap and their service was fine.

My 8D window seat, was 18 1/4 inches wide with a pitch of 32 inches. Even for me, a small person, it meant no room. But then it gets even worse. The person in front of me reclined. You get the picture. 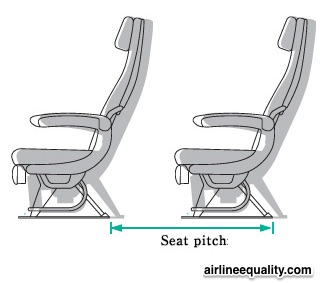 Where are we going? To passengers’ property rights on a plane.

But first, let’s look at the seats.

Discount lines have the least pitch. For shorter flights, Frontier’s and Spirit’s planes offer as little as 28 inches while Southwest has 31 to 33 inches. Similarly, the large legacy carriers went down to 31 to 32 inches in economy. At 32 inches, jetBlue is also on the low side.

We should note that to an airline, two inches can make a huge difference. According to BusinessInsider, when JetBlue switched to a 32 inch pitch from 34 inches on the economy seats in its A320s, it got an extra 12 seats on the plane.

With so little room, reclining becomes the big issue.

An economist would say that reclining is really about property rights. When you buy a airline ticket, you also purchase the right to recline. And that means you temporarily “own” the space behind your seat. Some would disagree though and say those property rights belong to the passenger behind the recliner.

Whatever the resolution, our “takeaway” is the need to define and preserve property rights. Alexander Hamilton knew this in 1790. He knew it was crucial to protect the current Revolutionary War bondholders–even if they were evil speculators who took advantage of  widows and war heroes. He knew he had to preserve their property rights. (They had purchased bonds that became their property.)

So, when you think about reclining on an airplane, do also ponder property rights. As I return to New Jersey today, I know I’ll be wondering whether I own the space in front of my seat or the recliner.

My sources and more: When I tried to confirm that my JetBlue seating was as constricted as it felt, I found this BusinessInsider overview and this detailed summary chart from Seat Guru. But if you just want to read about reclining, then I suggest WSJ, the NY Times, and here.

Why It's Tough to Give (Campaign Finance) Money Away