Why It’s Tough to Give (Campaign Finance) Money Away

The city of Seattle has been trying to encourage voters to contribute to a political campaign.

They made it easy.

Approximately 10 months before the election all registered voters received four $25 vouchers in the mail. Then, in envelopes with the necessary postage or by drop-off, they could donate to a local political candidate.

You can see the goal. Increase political participation. Multiply smaller donations so big money is less dominant. Motivate candidates to meet with a diverse group of voters. Support candidates with sparse funding.

It did not work out quite as they expected.

The whole idea began in November, 2015 when an initiative to create “Democracy Vouchers” was approved. For the 2017 election, half a million registered voters received vouchers they could use in local primaries and the general election. To fund it, Seattle dedicated $3 million per year in new property taxes. 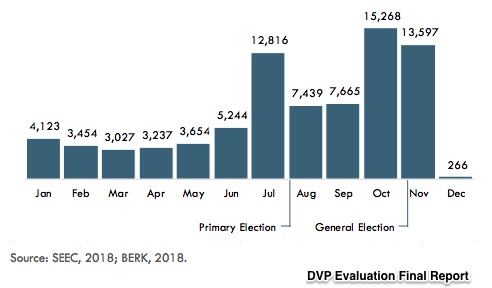 So yes, there was somewhat more diversity among the donors and the candidates. And yes, the number of contributors topped 20,000, more than double the cash contributors to the 2015 election. But according to a Vox podcast, just 3% of all eligible voters participated.

Now, committed to future election cycles, they are trying to figure out all that went wrong. One reason could have been the envelope. Described as looking like “Publishers”s Clearinghouse,” the envelope was thrown out (and probably unopened) by an estimated 75% of the recipients. Mailing the vouchers 10 months before the election could also have diminished participation.

The incentives that were supposed to propel Seattle’s Democracy Vouchers program were insufficient and even counterproductive. As economists, we can point out that incentives are always a part of fiscal policy. The success of the decisions that our politicians make about spending, taxing, and borrowing will always depend on where they nudge our behavior.

In a 51-page Democracy Vouchers evaluation, Seattle was very aware of its incentives problems. Solving them, though, might not be so easy.

My sources and more: Thanks to Vox’s The Impact, for the “Democracy Vouchers” podcast. Their series on experimental policy initiatives sounds good–something to look forward to. Beyond the podcast though, I definitely suggest reading the city’s evaluation of the program and its recommendations. They were very much aware of their incentive problems.

The Pitch That's An Airline Problem

An Amazon Market in South America