Where Education and Healthcare Could Be Better

There was once a mayor of NYC who stopped people on the street to ask, “How am I doing?” Somewhat similarly, the World Bank is encouraging 157 countries to ask the same question. They want us all to ponder how successfully we are developing our citizens’ human capital so that we can do better.

Whenever we add to our knowledge, we build our human capital. But since it all starts on the day we are born, the investment in health and education could take 18 years or more to provide a return. The result? Countries underinvest in human capital even though it generates less poverty, more growth, and a more educated, resilient, innovative labor force.

And these were the bottom seven:

The Index was based on the answers to five questions:

We are healthier and better educated. In low income nations, in 1980, 84 of 100 children lived to age 5. This year, 94 of 100 children reach their fifth birthday. Correspondingly, in those less developed nations, the number of children enrolled in primary school increased from 5 in 10 to 8 in 10.

Still though, in many countries, children will not have the opportunity to develop their human capital. And, if we look at the number through a gender lens, the girls especially are constrained.

While production possibilities (pp) graphs typically tell us if we are optimally using our land, labor, and capital, they could also let us easily see a Human Capital Index ranking. On the graph, the curve represents the maximum production capability. Then a dot inside the curve conveys the land, labor, and capital efficiency at a given point in time.

With the Human Capital Index, the nations with the highest scores are closer to the curve. Why? Because the curve displays the most human capital a child born today could acquire in 18 years. So, assuming healthcare and education inputs are equal then Singapore is closest to the curve, the U.S. a bit more distant, and Afghanistan, at #133, is low on the education and healthcare axes. 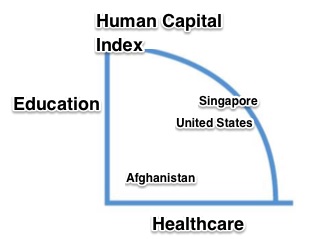 Returning to where we began, the dots on a production possibility graph provide an answer to Mayor Ed Koch’s (1924-2013) question, “How am I doing?”

My sources and more: WSJ had the best summary of the report. But if you want the original, this is their 59 page report. Then, much more detailed, each country’s data is included.

Our featured image is from a World Bank video on the Human Capital Index.

Six Facts: What Our Pet Spending Says About Us