Why Traffic Jams Are Spreading

During my frequent drives to Manhattan, traffic congestion is worse than ever. The reason could be Uber and Lyft.

Let’s start with congestion. Like the Supreme Court quote on pornography (“…I know it when I see it.”), we all know when we are stuck in a traffic jam. However, in a new paper on San Francisco congestion (2010-2016), researchers tell us how to measure it. You have to look at vehicle hours of delay (VHD), vehicle miles traveled (VMT), and speed.

From there, they asked what could affect their three variables. Citing population and employment they explained that basic sources of demand had to be considered. Then though, they took us to the supply side with roadway capacity and TNCs (transportation network companies aka ride hailing services aka Uber and Lyft). A final consideration was new technology that could lead, for example, to more delivery trucks because of online shopping.

Their conclusions? Even when you consider all of the demand and supply reasons for more congestion, the TNCs play a huge role. You just have to look “before” in 2010 and “after” in 2016. The number of daily hours of delay increased from 65,000 to a whopping 105,000 or so. (The middle bar is a counterfactual calculation): 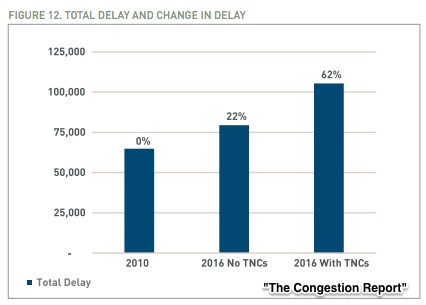 Researchers concluded that TNCs were more than half the reason for the extra delay: 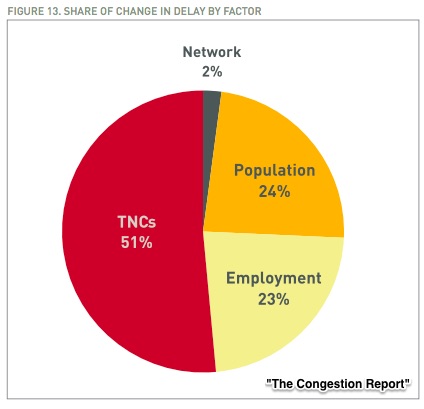 Similarly, they observed that speed diminished by 13% from 2010: 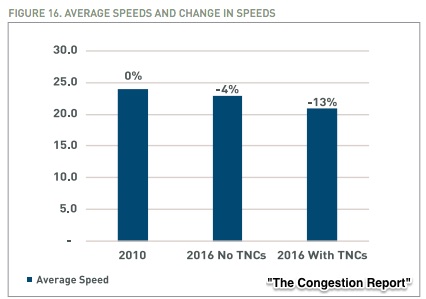 And again, the TNCs were more than half to blame: 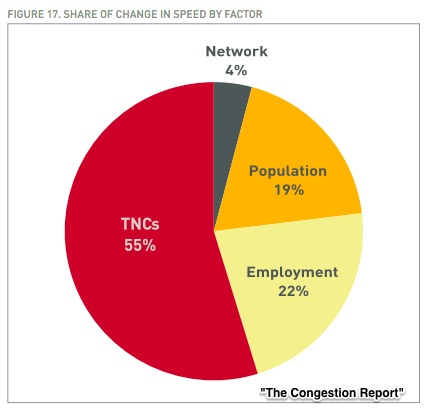 Then, adding the 600,000 extra miles traveled on a typical weekday between 2010 and 2016, we can see that the impact of Uber, Lyft, and other TNCs on our daily lives is considerable.

Hearing about TNCs in San Francisco, an economist would say we have a negative externality.

Defined as the good or bad impact on a “bystander,” that is an uninvolved third party, an externality can be positive or negative. A typical example of a positive externality is vaccinations. In addition to those receiving the injections, others won’t get sick. For the negative externality example, we can cite pollution. The factory that pollutes the air can increase the incidence of asthma in the population.

Thinking of the San Francisco congestion report, we can imagine the nationwide spread of the negative externalities they cite… to me (and you) in Manhattan and beyond.

My sources and more: Thanks to Forum on NPR for alerting me to the San Francisco congestion study. From there, streetsblog had an overview of this TNC impact paper  while The Washington Post looked at NYC’s new TNC cap.

Our featured image is from San Francisco’s “Congestion Report.”

Our Weekly Economic News Roundup: From an Uber Apology to a Chase Logo