How much patience you display could affect your economic decisions. So too could your preference for risk and your altruism. Add to that positive and negative reciprocity and trust and you get a new metric, the Global Preferences Survey (GPS).

Given to 80,000 people in 76 countries, the survey sought to identify gender differences. Today, let’s look at some of the results.

The GPS questions for identifying a preference for patience (now or later), risk (save or bet on a lottery), altruism (giving), and trust were pretty predictable. However, we should note that negative reciprocity looked at revenge-related behaviors while positive reciprocity was about demonstrating your appreciation through rewards.

The researchers hypothesized that there would be a correlation between per capita GDP and gender differences for their six variables. I would have said that the more affluent the country, the smaller the gender difference. Their results indicated the opposite.

You can see in their map, that the U.S. and Canada were among the countries with the larger gender differences:

The researchers divided the countries in their survey into four economic development “bins.” The following graphs display the “country level gender difference” from the poorest group to the most affluent. A “+” at the top means that women display more of a preference for the trait. The “-” means the women prefer it less. As the bars move higher, the male/female gap widens: 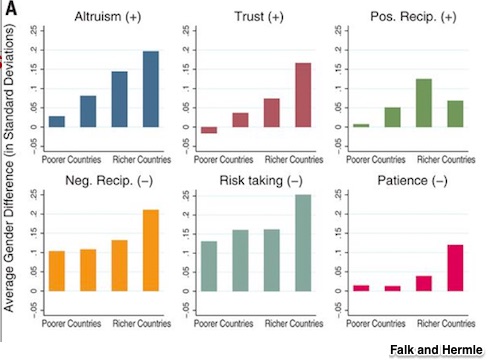 They also created a gender equality index to see the correlation with their six variables. The results echoed what they found for per capita GDP. In more gender equal nations there were more pronounced gender differences: 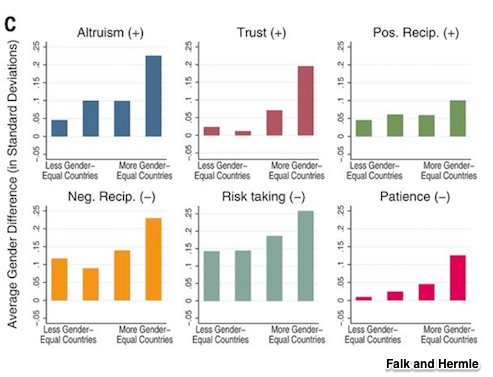 If we accept the results of the Global Preferences Survey for gender differences, then we can see why men and women make different economic decisions. And that is precisely where the economists who created the metric hoped to generate more insight. They hypothesize that when we are not as worried about subsistence, then we have more room to express our gender-specific preferences. Similarly, when resources are more equally distributed, then we can more independently display our gender-associated differences.

So yes, knowing these human capital preferences, we can better grasp a country’s economic development, its inequality, and its gender relationships.  But I still have questions.

My sources and more: Thanks to Marginal Revolution for alerting me to the gender and economic development paper. Then, if you want to see how the Global Preferences Survey’s six variables apply to individual countries, do look here.

Why Traffic Jams Are Spreading