How a Behavioral Economist Explains a Frappuccino Problem

Since 1995, many of us have been consuming shamelessly decadent Frappuccinos.

Just one Ultra Caramel Frappuccino with dark caramel coffee, layers of whipped cream (each topped with a dollop of caramel sauce), and white chocolate tops the 400 calorie threshold. Add 100 more calories and you could eat a Big Mac.

Only three years ago, Starbucks generated 14% of its company operated cafe revenue from Frappuccino sales. Now they are down to 11%: 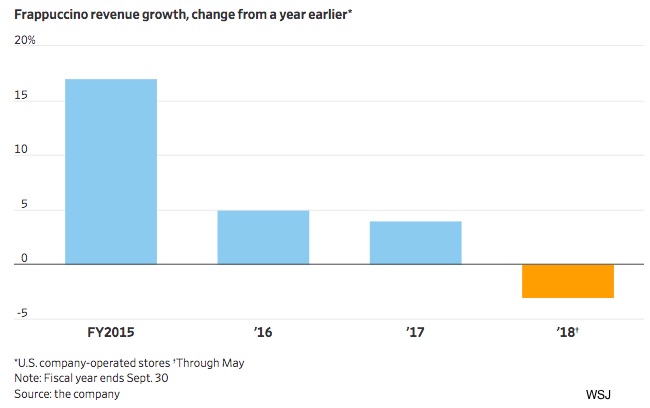 Starbucks got the message. They are developing a healthier Frappuccino.

How To Change a Frappuccino

To get less sugar and fewer calories, Starbucks says they tried 20 types of cream and 70 vanilla flavorings. They were most concerned with the texture. But also they had the sweet taste and the delivery to figure out. They needed a new bottle that dispensed the right dose each time a barista filled an order.

The result is a drink now being tested in 600 Starbucks cafes in California, Missouri, and Rhode Island (interesting geographic spread). The 16 ounce size has 50 fewer calories, 18 fewer grams of sugar and less sodium too.

A behavioral economist might say that Starbucks has to balance the loss aversion from the endowment effect with the gain from adopting a new norm. Their problem is that one slows innovation while the other spurs it.

According to the endowment effect, we like to stick with what we are used to. The reasons? Not only do we give greater value to what we own but also, avoiding loss can be more important to us than the equivalent gain.

Taking a small leap, we can apply the same phenomenon to a new Frappuccino recipe. Unless customers recognize enough of the old drink, the endowment effect could kick in. Like the New Coke fiasco during the 1980s, they could feel the loss of the Frappuccino they know and reject the new version.

The offset though is that eating healthy has become an increasingly popular social norm.

So, Starbucks has to minimize the endowment effect by making us feel that the new drink is like the old one. However, at the same time they want us to know that the Frappuccino has less sugar and fewer calories.

Can they do it?

My sources and more: In their excellent series on beverages, WSJ had all the details on the new and old Frappuccino from Starbucks. Then, for the behavioral economics side, you might enjoy this paper that was co-authored by Dan Ariely on the endowment effect and this one from Nobel economics laureates Daniel Kahneman and Richard Thaler and also by Jack Knetsch.