Looking at South Korea and the U.S., a 60-hour workweek might not be so unusual. But the reasons are somewhat different.

Originally targeting economic growth, South Koreans were encouraged to work longer. Now though, a low birth rate, declining productivity, and other social problems have led the government to proclaim “the right to rest” by slicing 16 hours out of its workweek. They could diminish a 40-hour workweek by so much because 28 hours of weekend work and overtime were legal. The new maximum workweek is 52 hours.

Workers in the targeted businesses are not pleased because they expect less pay. Also, it appears that the switch will create a bit of culture shock until people get used to it. At one firm, employees were told to get everything done during their shorter workday. Or, as one employer said, “It is now work concentration period.” Meanwhile, the new rule has rippled beyond the workplace with late night restaurants seeing fewer customers.

The plus side though would be more hiring for as many as 130,000 new jobs. It also will mean better worker health and productivity.

You can see that South Korea is near the top:

In the U.S. also, many of us work during the weekend and late at night between 10 PM and 6 AM. Because the authors of one study wondered what would be lost if the law required less work, they looked at “Long Workweeks and Strange Hours.”

Our purpose now is just to see if we do work “strange hours.” And yes, compared to five European nations, our hours only resemble the U.K.’s. Otherwise, Europeans work much less over the weekend and during the evening. In the U.S. one in every three workers uses the weekend for some work. Slightly less, one in every four does at night work. (One in every 14 does work at night in France.)

Looking at the following table, you can see that 3.9% of the U.S. workforce puts in more than 65 hours a week. Germany is close to half that proportion while France is even less. Meanwhile, the U.K. exceeds us: 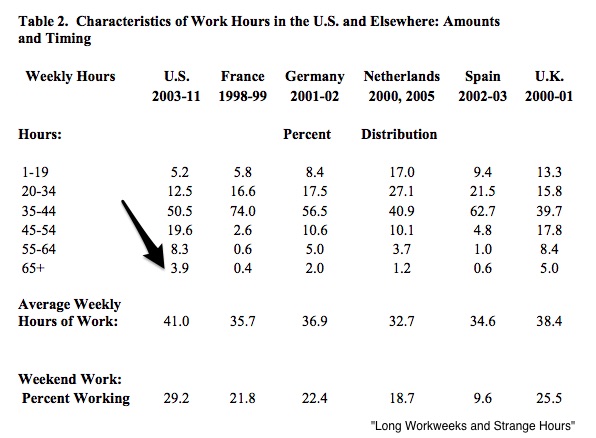 Also focusing on how long we work along with other criteria, Wallethub identified the hardest working U.S. cities. Other variables included the share of workers with unused vacation time and leisure time. 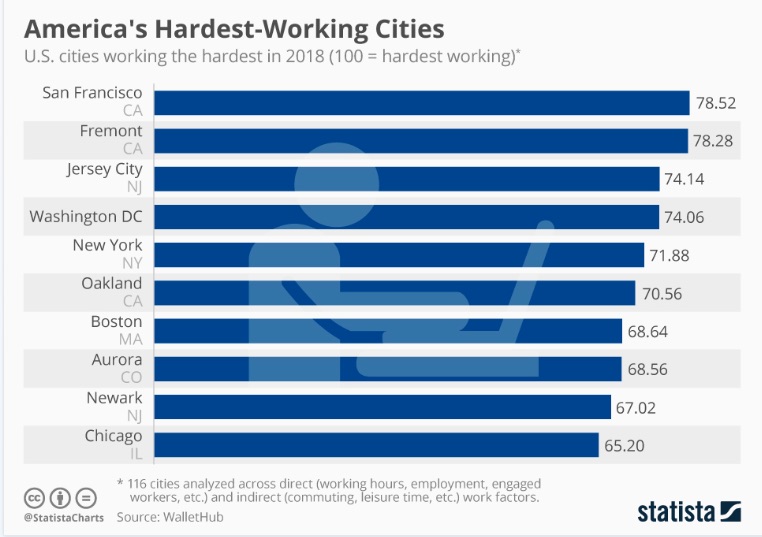 We use land, labor, and capital to create goods and services. Then, we can divide capital into physical capital (like tools) and human capital. Defined as labor’s knowhow, our human capital propels economic growth.

So, whether looking at South Korea or the U.S., especially on Labor Day, we can ask about how many hours we work. And we can wonder if the long hours are optimal for mobilizing our human capital.

My sources and more: This WSJ article from July 1 had the details on South Korea’s new work day law while the OECD had productivity and hours worked data. As for more on U.S. work hours, an NBER study considered “strange hours” whereas Wallethub had the numbers details for the hardest working and less hardworking U.S. cities.

How a Behavioral Economist Explains a Frappuccino Problem