A brief look at Dover can give us a pretty good idea of what we need to include in a  Brexit to do list. 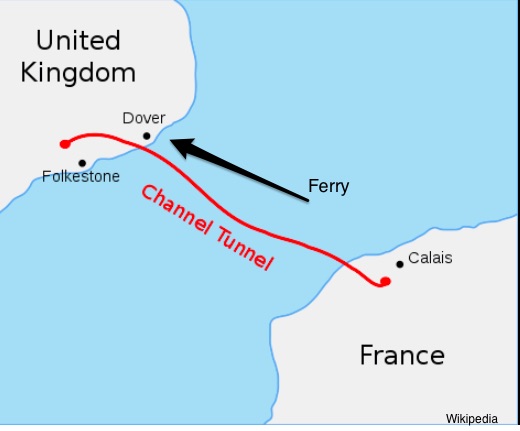 Please imagine a port where close to 10,000 trucks can arrive after a short ferry ride from Calais. Nearby, another 6000 or so come through the Channel Tunnel. As a part of EU traffic, they move in and out of the U.K. smoothly. Knowing down to the hour when parts will enter the country, manufacturers can dependably plan ahead.

The non-EU trucks, even from Switzerland, have forms to fill. They need to declare what they carry so the relevant duties can be calculated and levied. At the least, there is a 20 minute wait. But it is more likely that the delays will be hours with drivers waiting in restaurants and lounges, eating, watching TV.

Comparing EU and non-EU traffic gives us some idea what needs to be figured out by 11 p.m. London time (midnight at EU HQ in Brussels), on March 29, 2019 when the UK formally departs. We have drivers from different countries, food, flowers, durable goods, related services, duties…For all of these items and more, new customs procedures, processes, and people will be needed.

The complexity becomes even more evident when we realize that nothing can be formally agreed until everything is agreed. We don’t necessarily have a linear process. Instead Brexit is an EU/U.K. negotiating puzzle that requires all the pieces.

So let’s look at the entire to do list.

Our To Do list was called a Brexit Readiness Score by its creator. The higher the 1-10 number, the more they’ve accomplished. You can see the most recent score is up by 13:

Looking at the EU, we can always return to David Ricardo. As the 19th century economist who told us that trade makes the world more productive because of comparative advantage, Ricardo surely would have opposed Brexit.

And just like he supported importing graIn 200 years ago, today he would have appreciated the frictionless entry of EU cargo in places like Dover.

My sources and more: During yesterday’s walk, I returned to Brexit through a Peterson Institute Trade Talks podcast. It re-ignited my interest in Brexit and took me to the initial PIIE readiness Score and then to these updates, here and here. (Crucially, it also emphasized how tough it will be to figure out Northern Ireland’s position.) Meanwhile FT had the to do calendar of dates. As for customs details, this entire report conveys mind boggling detail while an Economist article had the Dover example.

Please note that our featured image is from a Thomas Reuters Brexit report.

The Economic Side of Competitive Eating