The Economic Side of Competitive Eating

There was a mix-up though. Because the judges missed a whole plate, they thought he had won with 64 but then realized an extra 10 had gone down. However all ended well when Brooklyn District Attorney Eric Gonzalez certified the results. For his eleventh win, Chestnut got the coveted mustard belt and $10,000.

These were the top five men’s and women’s hot dog eaters:

And this was their prize money: 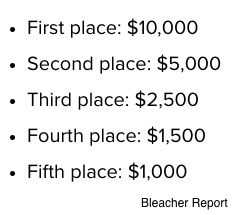 Where are we going? To the business side of competitive eating.

While Nathan’s July Fourth hot dog contest is the Super Bowl of eating events, there are thousands more during the year. Philadelphia has a wings competition (501 was the winning total last February), Buffalo, NY does kale, and the World Cheese Curd Eating Championship will be held at the Wisconsin State Fair on August 11, 2018. With local purses ranging from a total of $2,000-$4,000, the stars make their money through sponsorships.

An economist might say that multiple competitors and thousands of contests make the competitive eating market resemble perfect competition. Add easy entry and exit and a somewhat identical product with a low price, and you wind up with competitive eating on the left side of this market structure continuum:

But not for everyone.

The few competitive eaters that are really good differentiated themselves. Kobi (Takeru Kobayashi) figured out how to eat much faster. Pre-Kobi, people were just eating their normal way. They gulped down a hot dog and a bun, drank some water and started all over again. Kobi realized that the buns could slide down your throat as easily as the hot dogs. Using water, you just needed to squeeze them into moist balls. And the rest is history.

Rather than 14 or 15 hot dogs, the top eaters began devouring more than 50 in just 10 minutes: 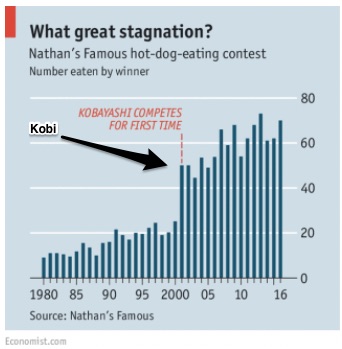 Beyond hot dogs, Kobi’s records include 62 slices of pizza in 12 minutes and 13 grilled cheese sandwiches in one minute. He is a six-time champ of the Nathan’s event but stopped because of a contractual dispute with the event’s sponsor.

As economists, we can remember him and Joey Chestnut for the product differentiation that increased their pricing power. No longer in a perfectly competitive market, they moved to the right:

My sources and more: This Sporkful podcast is the perfect way to learn about the economics of competitive eating while USA Today has this year’s contest facts. Then, for some analysis I recommend Quartz and CBS News. Finally, if you still want more, do look at the Bleacher Report and Major League Eating.

Please note that this post is an updated version of our yearly look at the Nathan’s Famous competitive eating contest.