How to Make Kids Smarter (And Also Help the GDP)

If you were born in 2012, your parents could have been quite pleased. Having arrived during the Year of the Dragon, a baby was supposed to have intelligence and good fortune.

But are Dragon babies really smarter? Economists have an answer.

In China, just before 2000 and 2012, marriage rates went way up and then, in those Dragon years, the birth rate also rose. Next, as Dragon children grew up, they were the ones–more than kids born under the 11 other zodiac signs–who graduated college and/or grad school. They also were better test takers.

You can see below that births increased during Dragon years: 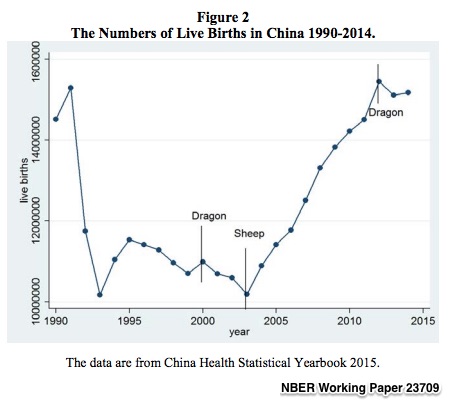 So what is going on?

In a recent NBER working paper, researchers noted that parents of Dragon children were more likely to initiate contact with their children’s teachers and enroll their kids in kindergarten. Those parents also were less likely to have their children doing household chores. They even gave them more pocket money.

It appears though that Dragon children were not smarter than their peers. The one variable that distinguished them was their parents’ expectations: 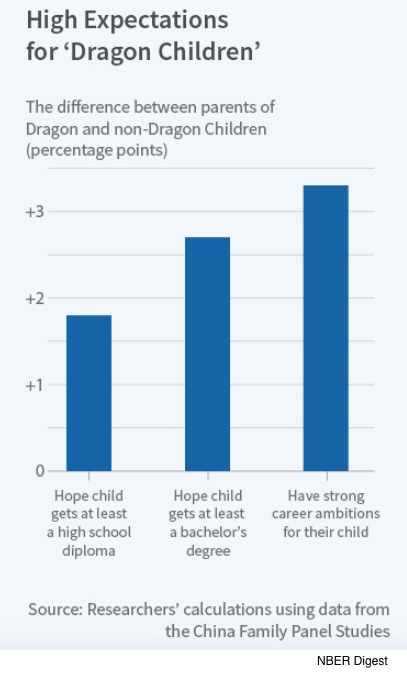 As economists we can explain why Dragon children achieve more by looking at capital. One of the three factors of production (land, labor, capital) that make up all goods and services, capital can be divided into physical capital and human capital.

Physical capital refers to the tools, equipment and buildings that are people-made. The word investment is typically used with physical capital to indicate we have added to the existing stock. As new computers or a new plant, our extra capital could have boosted productivity.

Similarly, we can invest in human capital. Then though, we can increase productivity and the GDP by adding to people’s knowledge and skills.

And that returns us to dragon babies. Their parents are just investing more in their children. The result is kids with more human capital.

My sources and more: You might enjoy beginning with this SF Gate article for the best picture of the Dragon child, Next I recommend these two summaries of Dragon baby studies and the original (gated) paper. Then, finally, if you just want a good read, this Bloomberg article and a Quartz discussion are perfect.

Why We Give The Wrong Gifts