The size of a typical British wine glass has ballooned during the past 300 years. Close to 70 ml in 1700, now it is more than six times bigger.

Where are we going? To glass, plate, and portion sizes.

During the 18th century, wine was for the very wealthy. At a meal, when empty, a 66 ml wine glass (2.2 ounces) would be whisked away by servants. They then rinsed and cooled it, and hovered nearby with more when asked.

Though not typical, this description from the Duke of Wellington tells us what King George IV drank with his pigeon and beef steak pie during an 1830 breakfast. It included “…three parts of a bottle of Moselle, a glass of champagne, two glasses of port and a glass of brandy!”

You can see below where a Cambridge study located British wine glasses and how large they became. The monarchy was a handy source of data because each new sovereign commissioned a set a glassware:

Fast forwarding to the 20th century, between 1960 and 1980, wine consumption was up fourfold and then it doubled during the next 24 years.

It makes so much sense to assume that we drink more wine because our glasses are bigger. And, we eat more food when given a larger plate. There even are plate size studies from Cornell that confirm the logic. But recently they were invalidated because of questionable data. Perhaps replacing them, there is another study that indicates smaller plates lead to more intake because of refills.

Then, what do we know? We can be sure that we are eating bigger portions and drinking from larger wine glasses. 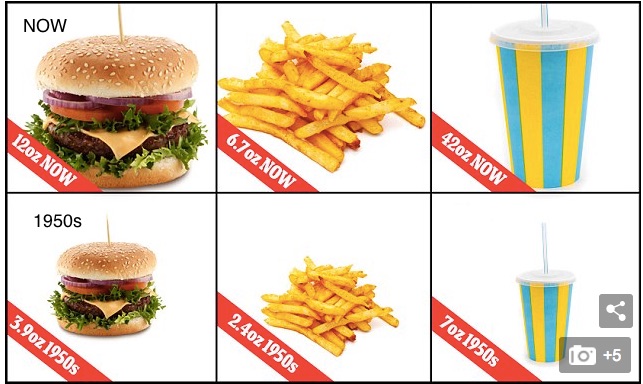 However, as intuitive as it seems, we have to be wary of picking facts that confirm a prior belief. Our glasses and our plates might not be the cause of excessive consumption.

My sources and more: Thanks to marginal revolution for alerting me to the wine glass paper. The Guardian also looked at the study while the Daily Mail moved onward to portion size. And from there, the next logical topic was plate size.

Please note that this post was slightly edited after it was published.

Why China Wants To Be Called a Market Economy

How to Make Kids Smarter (And Also Help the GDP)