According to President Trump and most other politicians, tax reform will be “a middle class bill.”

So let’s try to figure this out.

In a Gallup poll from last June, 62% of the respondents said they were in the middle class or upper middle class. Only 2% identified themselves as upper class while 36% said working and lower class: 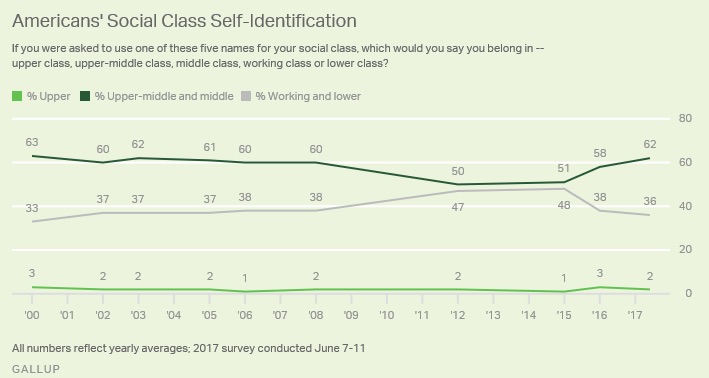 Slicing the data a bit differently, Gallup also concluded that there was somewhat of a connection between age and the class people identified for themselves. Below you can see that the percent saying they were working and lower class went down as age went up. Correspondngly, the opposite was true for the middle and upper middle class:

Maybe then to identify the boundaries of the middle class we just have to decide who is rich.

But even here there is no perfect answer. Slate told us in 2014 that erratic incomes mean that people slide in and out of a category we could call rich:

How Many Americans Get Rich and For How Long?

At least one year: 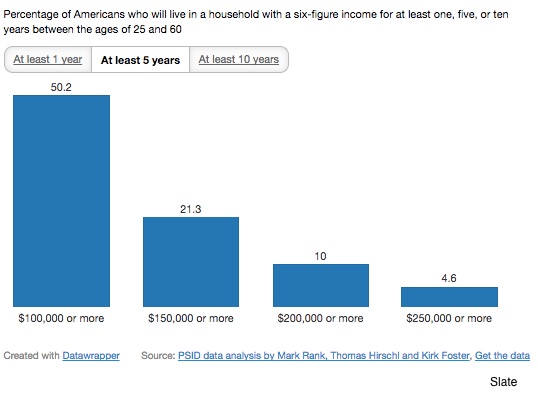 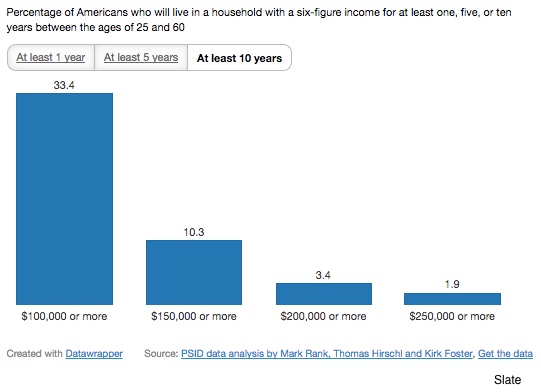 As our final approach, let’s just look at the top 2% to see where the upper middle class ends. But even that gets us into blurry territory.

According to Business Insider, the average top two percenter would be earning $206,000 or more. However, there are considerable regional differences. In North Dakota, Idaho, and Mississippi the average person in the top 2% earns $150,000. Meanwhile for Colorado and Rhode Island, the number is $225,000. And it climbs to $280,000 in New York.

So, where are we? Let’s just conclude with a shared ethos.

NY Times journalist David Brooks perfectly summed up what it means to be middle class.

“To be middle class is to have money to spend on non-necessities. But it also involves a shift in values. Middle-class parents have fewer kids but spend more time and money cultivating each one. They often adopt the bourgeois values — emphasizing industry, prudence, ambition, neatness, order, moderation and continual self-improvement. They teach their children to lead different lives from their own, and as Karl Marx was among the first to observe, unleash a relentless spirit of improvement and openness that alters every ancient institution.”

Sadly, the one definition we all share does little to help the Congress with tax reform.

My sources and more: Bloomberg has been talking about the problems with identifying the middle class and took me to this Gallup poll.  Completing the picture, Business Insider had more on the dollar demarcations while Slate was the best for insight.

Please note that several parts of this post were previously published at econlife.

Why China's Scientists Got the Wrong Message