Why China’s Scientists Got the Wrong Message

In 2016 it appeared that China had become a research powerhouse. In 2017 they discovered a problem.

This is the story of how incentives can have unintended consequences.

In 2016, the numbers told a phenomenal story. China was spending massive money on research. They had established a satellite launch center and a synchrotron radiation facility. They were measuring neutrino oscillations and building the earth’s biggest single-aperture radio telescope.

You can see below how China’s research spending compares to other selected countries, 2000-2014: 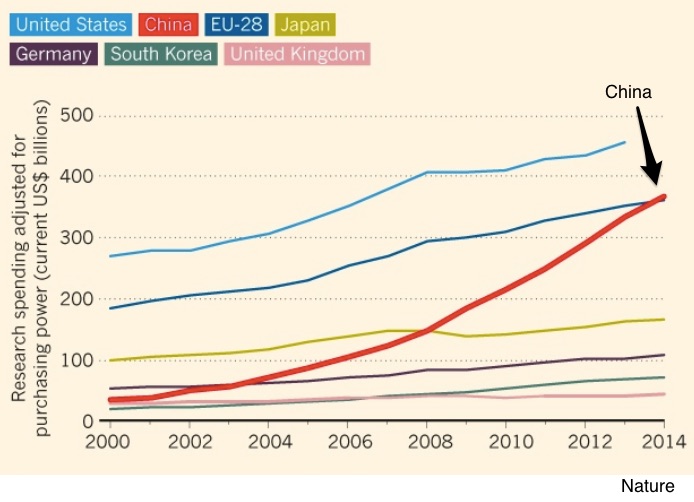 So yes, they were encouraging their scientists to publish prolifically and show the world their technological prowess. The goal was commercial innovation that would boost the quality of their economic growth.

By 2017, the narrative had changed. Instead of breakthrough research, it was questionable research. After scientific journals started retracting an usually large proportion of Chinese papers because of fake peer reviews, they realized they had a problem.

While the market sends incentives from the bottom up, a command economy works from the top down. As a result, the incentives differ.

Because the market’s incentives relate to self-interest, it encourages us to recognize consumer demand. As a result, its quality and quantity satisfy what people want. When the market performs optimally, it encourages individuals like Steve Jobs and winds up with Apple’s innovations.

However, when incentives come from the government, people tend to do whatever is mandated from the top. The former Soviet Union demonstrates what can happen. As a command economy, the government established production quotas. This cartoon from the satirical magazine Krokodil showed the probable response to a quota based on weight.

Ignoring practicality, the factory did what they were supposed to do. They produced the right poundage and wound up with a giant nail:

Similarly, the Chinese established the equivalent of a quota for research. They got the research. But it too was not as usable as they had hoped.

My sources and more: As a before and after, Nature and the NY Times were a perfect pair. For the Soviet story my favorite textbook, Understanding Our Economy, was the source.