On Black Monday, 30 years ago, the stock market plunged 508 points. At 22.6%, the dive was the worst ever in exchange history. Today, a 5,100 point drop in the Dow would have been an equivalent decline.

So yes, we all know that speculative frenzies have to come to an end. But this was worse than anyone expected. 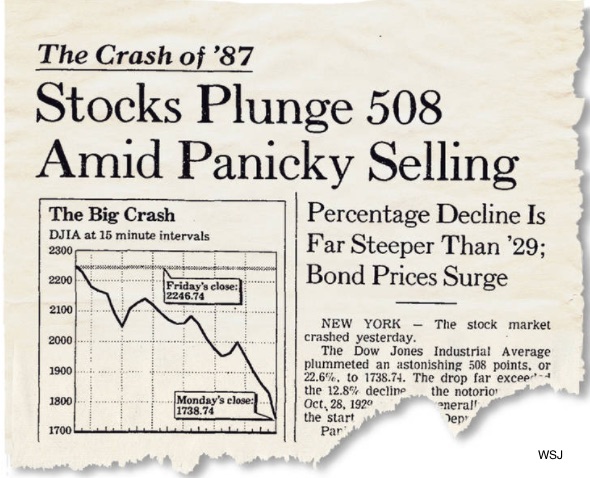 To see what was so catastrophic, let’s look at the story and the reason we need healthy financial markets.

On Monday October 19, 1987, the Dow Jones Industrial Average entered a free fall that ended more than 500 points and 600 million shares later. Many of us expected the bloodbath to continue. However, with the next day up 6%, the aftermath was not as bad as people expected. Still though it took two years for the market to return to its October highs.

Looking back, many say portfolio insurance was at least partially to blame. Portfolio insurance is a type of program trading that is based on algorithmic instructions. Whenever the price of certain securities fell by a predetermined amount, the algorithm said sell 3%. Another fall, another 3% sale. Minimizing risk, the formulas were supposed to erase losses and enhance gains.

But it did not quite happen that way.

Healthy financial markets fueled our nation’s economic growth. Funneling money from Main Street to Wall Street and savers to spenders, they created capital and consumer goods. Sometimes though, they are not quite predictable…

My sources and more: While articles on stock market crashes abound, it’s the books that were superlative. Two I especially liked were Michael Lewis’s Flash Boys and Frank Partnoy’s Wait. In addition, Jeremy Siegel’s Stocks For the Long Run is a classic that I use as a handy reference and I do recommend my chapter on stock market history in Econ 101 1/2.

Please note that several paragraphs in this post were published previously in Econ 101 1/2.