Almost everyone in Sodeto, Spain won the 2011 national lottery with ticket number 58,268. They had less than a 1 in 100 million chance of hitting the jackpot.

But still they bought the tickets.

Every year since 1812, Spain has celebrated its Christmas Lottery. At first the government ran it traditionally. Millions of small tickets were sold with one person winning millions.

The government though was criticized for a regressive program that took advantage of the poor. Because the odds of winning were so tiny, the participants wasted their money. So the government decided to increase the price of tickets to where only the rich could buy them.

And that’s when the unexpected happened.

With tickets costing so much, people decided to buy them in groups. Rather than excluding the poor, the new system created more participation because players bought shares of tickets. The result was a communal celebration on December 22nd. Typically 75% of the country dreams of winning a slice of a billion euro prize.

In the U.S., lots of us like lotteries too. During 2014, we spent $70 billion–more than most other forms of entertainment: 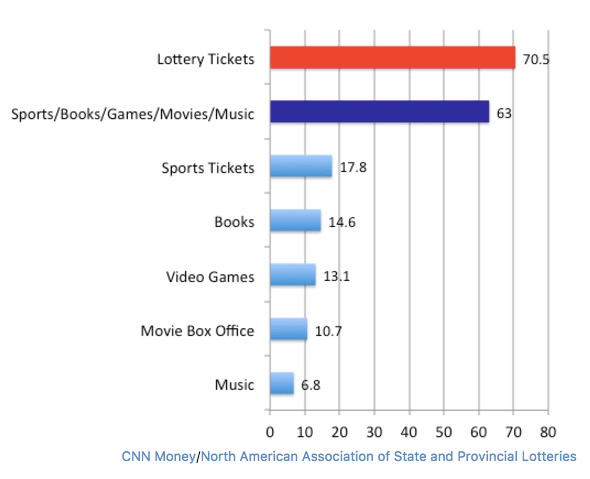 The people who buy lottery tickets know they have an infinitesimal chance of winning. But still, they buy the tickets. Nobel economics laureate Dr. Kahneman might say we are displaying probability neglect. We ignore the probability because it makes us feel so much better.

One economist even suggested that people buy tickets way in advance. Then, at least they can get the pleasure of anticipation for a longer time period.

And in Spain, they can also look forward to the annual December 22nd celebration.

My sources and more: I enthusiastically recommend two podcasts. Do listen to 99% Invisible  for the Spanish lottery story and the Atlantic for insight about lottery participation. Then, for more on probability neglect, I recommend Daniel Kahneman’s Thinking Fast and Slow and this Cass Sunstein paper.