On the Titanic, celery was a first class staple. Roast squab, cress and pâté de foie gras were served with it. And because celery was associated with the Victorian elite, it became a status symbol in 19th century British households.

So yes, like celery, the foods we eat have always conveyed a message.

During the 18th century pineapples were exported to the American colonies from the Caribbean. Sufficiently rare, exotic and perishable, they were sold for today’s equivalent of thousands of dollars. Merchants even rented pineapples to people who wanted to show them off.

Below, King Charles is receiving a pineapple: 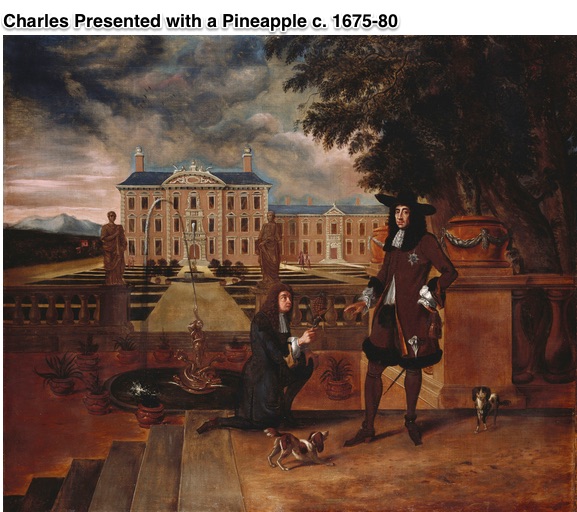 During the 20th century, the pineapple became a normal fruit. The reason was a device that could snatch, peel, core and slice the ends off 100 pineapples each minute. With a bit more processing and some syrup, they were ready for a Dole Pineapple can. By 1923, demand had skyrocketed and the pineapple’s cachet was gone.

The pineapple’s pattern was typical. First we associate some type of food with an elite minority. Next, it becomes a status symbol with aspirational allure. But then, as the item’s popularity rises, its status falls.

Rather than huge affluence, recent culinary status symbols have related to a set of cultural values. Some examples are in the following graph that shows the duration of their rise and fall:

In his Theory of the Leisure Class, Thorstein Veblen (1857-1929) explains that the upper class signals its power by living extravagantly. Through their pricey purchases, they try to broadcast their elevated taste and prestige.

We could say that celery and kale also were conspicuously consumed.

My sources and more: Thanks to Quartz for alerting me to the celery link. My next stop was Mental Floss and this book, Then, this dissertation, the NY Times, and the BBC  came in handy. Finally, econlib has more on Thorstein Veblen.