If an elite technology entrepreneur wants to nudge a politician, his (yes he) massive wealth could generate results.

Where are we going? To how an affluent minority could influence government. 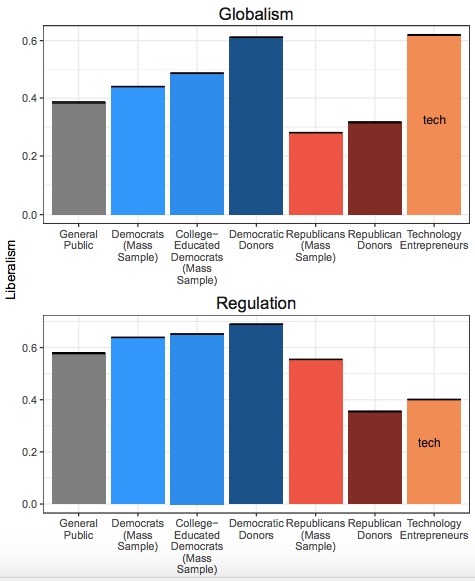 The survey also revealed a consistency between support for redistribution and social programs. Many said that tax hikes were okay. Some though selected $250,000 and others, $1,000,000, as the threshold. Correspondingly, there was comfort with universal healthcare and poverty programs. Here, people added that the private sector would be better at running government-funded programs. 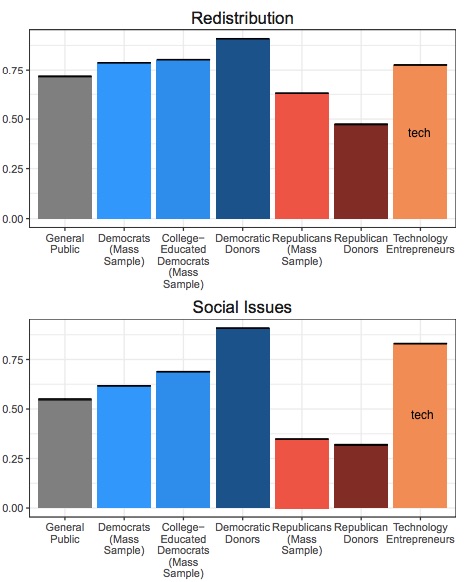 While the survey looked at the bigger issues, it also was more specific. Respondents approved of surge pricing and opposed labor unions. Their opinions reflected the appeal of the market:

Our Bottom Line: Equality or Efficiency

I wonder whether the survey displays a conflict between equality and efficiency.

In Equality and Efficiency The Big Tradeoff, economist Arthur Okun explained the tension between democracy and capitalism. Because democracy says we are all equal and capitalism says we are not, we have to make a choice. We could select the equality that taxes and social programs create. But having equal slices of our economic pie leads to less economic growth. It means a smaller pie.

When they were asked to choose, the elite technology entrepreneurs wanted more economic growth…even if it meant more inequality.

Based on their other replies, I suspect they have a dilemma.

My sources and more: I do recommend looking at the study that provided my facts and graphs. And a thanks to the NY Times for the link. Meanwhile, for a much broader look at the equality or efficiency tradeoff, do read Arthur Okun’s book. Then for balance, you might continue onward to Paul Krugman who believes there is no tradeoff.