We drink most of our fruit.

You can see below that the orange tops the juice list:

However, its lead is shrinking because of a squeeze from demand and supply.

I just learned that I am one of the few people to consume several oranges a week. The U.S. average is a tiny 2.7 pounds of oranges a year. On the other hand, most of you have been drinking orange juice. And most of that juice comes from Florida’s oranges. The problem for Florida is that OJ consumption has halved since 2002.

Making it worse, Hurricane Irma destroyed somewhere between 30% to 90% of this year’s Florida orange crop (depending on the location), Fewer oranges mean more expensive juice. One researcher from the University of Connecticut has predicted that a 10% price increase will result in a 7.6% sales decline.

An orange grove that was devastated by Irma: 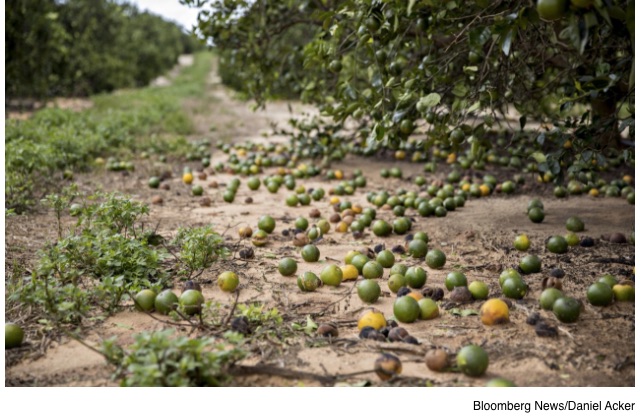 You can see that orange juice consumption is way down: 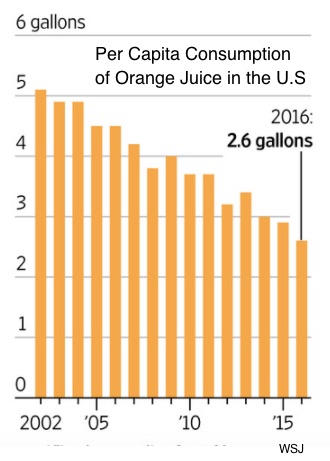 Meanwhile, apple consumption is up:

On the supply side, the big problem is a very small bug. Called citrus greening (or Huanglongbing), the devastation helped to diminish orange acreage by 17% during the past eight years.

The slide in production is quite evident below:

The good news though is that growers have begun to switch. Some have planted an oil-rich bean called pongamia that can be used for lubricants. Others are experimenting with olives, hops, and berries. And predictably, the quest for a disease resistant orange continues.

I suspect that we have the beginning of structural change where dying traditional economic activity is replaced by more viable businesses. As Florida’s orange production plummets, the amount of alternative fruit production is rising.

The lesson from the orange? Markets create incentives. When demand and supply decline, substitutes develop.

My sources and more: Thanks to WSJ for reminding me of Florida’a citrus problems. Two years ago, we wrote about the grapefruit. Now, the story is the same for the orange. And here, the Washington Post explains Irma’s impact.

Please note that several sentences from this post were previously published at econlife.