If you are an Elvis minister in Las Vegas, you have a problem. Nevada’s marriage rate is way down and so too is the wedding business. 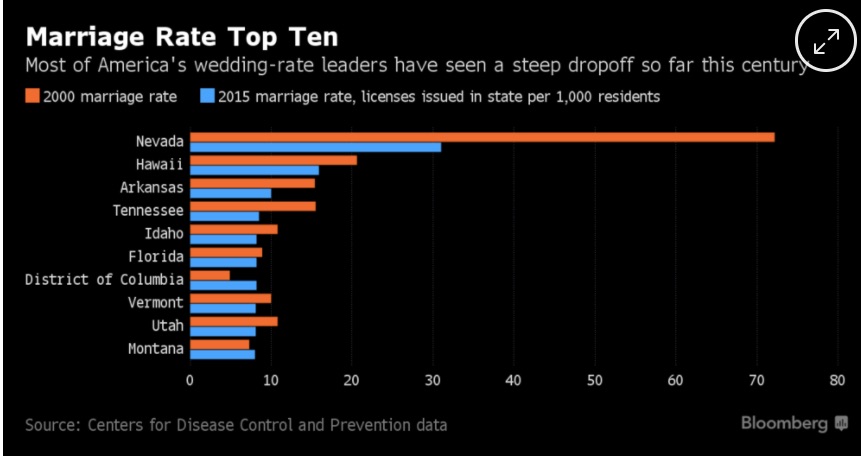 The bigger story though, is about shifting marriage markets.

The Decline of Marriage

As you move down the income scale, the proportion of unmarried people rises. Among upper and middle class adults aged 18-55, 56% are married. But when you look at poor adults, the number plunges to 26%. And for working class adults, it is 39%.

Asking why, we have a split between the left and the right.

The view from the left provides an economic image. It takes them to the less educated men who have lost their jobs. As the market for their skills contracted, so too did the number of women who wanted to marry them.

Meanwhile, the people on the right see traditional norms eroding. They look at the values that used to encourage family formation. Now, single motherhood has become acceptable.

Since each side focuses on a different set of problems, their solutions differ. Typical democrats would like to diminish inequality through better jobs and income redistribution. For the republicans, the goal is the return of traditional values.

The common ground? Most of us still value marriage.

Looking back at traditional marriage markets, we would see the men as “breadwinners” and the women, “domestic specialists.” The demand for women could have depended on their expertise in the home and for men, their earning ability.

Now the value of marriageable men and women is based on a more diverse set of variables. With changes that include automation, trade, working women and the pill, demand and supply in marriage markets have shifted. As a result, we’ve wound up with the decline of marriage and…

My sources and more: This NY Times Upshot article is ideal for a summary of the current status of marriage. Also, do look at Pew’s surveys and Bloomberg’s focus on Nevada.

The Cost of Commuting