One idea Alphabet has patented but not quite worked out relates to fly paper. If the car hits some unfortunate individual, the person will just stick to the vehicle’s “adhesive layer.” (Really)

A second approach from Alphabet subsidiary Waymo involves cushioning pedestrian contact. Assuming a less rigid exterior minimizes injury, they are working on a cabled surface that “loosens” if an impact is imminent. Or as one news article said, “If someone was going to whack you in the head with a turkey drumstick, would you want the drumstick to be frozen or thawed?”

So yes, pedestrian safety is only one of countless ways that self-driving cars will impact our lives. In addition, we will have a massive spillover into jobs markets. The U.S. Department of Commerce just published a paper on the winners and losers.

The Impact Of Self-Driving Cars on Jobs

When we look at the direct labor force hit from self-driving vehicles, we are talking mostly of 3.8 million men. Employed as motor vehicle operators, they typically drive buses, taxis, trucks and ambulances. With no more than a high school degree, no health insurance, no pension, and hourly pay, they are vulnerable.

A second group that will be affected by automated vehicles could become more productive. Called on-the-job-drivers, these 11.7 million people need their cars to do an unrelated primary task. Here, the Commerce Department paper cites professions that range from personal care aids and police officers to postal workers, They are all individuals who might get more done if they are not behind the wheel.

Almost 12% of all workers could be affected by self-driving cars: 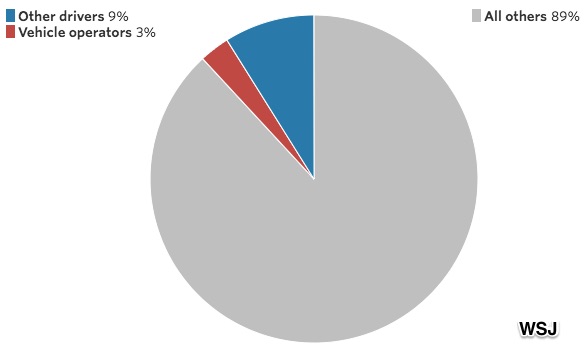 In the beginning we just have a car.

In 1920 (or so) it was the Model T. From the moving assembly line in the factory to a new world outside, the auto generated a massive ripple. We got suburbia, a highway system and an auto insurance industry. We also got McDonald’s.

Now again, a car could trigger spillover way beyond the factory floor. Composed of negative and positive externalities, the spillover from self-driving vehicles could change where we live. Cities that eliminate parking lots will have more space for people. We also will see new insurance products, regulatory change and different forms of car ownership.

And, as with the Model T, job market changes will be very tough for some people and beneficial for others.

My sources and more: Thanks to WSJ for alerting me to the Commerce Department paper. Then Quartz, the Mercury News. and siliconbeat (my quote source) looked at patents. But there is lots more to ponder…like ethics.