Hasbro included Finn and Kylo Ren in its newest Star Wars Monopoly game but not Rey. However, #WheresRey seems to have changed their mind…sort of.

Now, almost two years after this updated Star Wars game was first sold, you can buy a version with Rey on Hasbro’s website. But not in your local toy store. If you just want to add the Rey token to your game, Hasbro will send it. But you have to ask.

In movies, they give men the jobs that females do in real life. With bartending the most egregious example and business and doctors a close second and third, films misrepresent who does what: 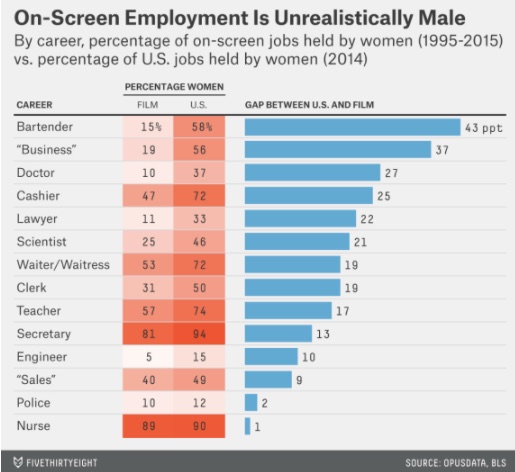 One reason for the male jobs bias is that film directors tend to be male. In their most recent movie “census,” a group at the USC Annenberg School noted a vast director gender imbalance for the 100 top fictional films (2007-2016). 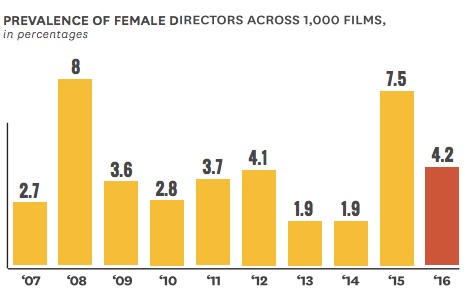 Specifically, 80% of all female directors did just one film in a decade. For men, it was 54.8%. And if you are very old or very young there is a 100% chance that you are a male director:

As behavioral economists, we could say that we have an expectations bias.

Or, as Annenberg’s Stacy Smith said, industry insiders primarily “think male.” When asked about directors, they said men had the ability to be the strong leaders. When asked about what audiences expect, they said male stars. Knowing that the data contradicts their response, we can say that their expectations bias is mistaken. The problem though is that it feeds on itself.

One of Dr. Smith’s solutions is to “Just Add Five” women to a script:

And also, to a Star Wars Monopoly game.

My sources and more: Thanks to the NY Times for alerting me to #WheresRey. From, there, the articles on Hasbro’s Star Wars games and figures were endless. They did help me recall a previous econlife on the Hollywood gender gap that it made sense to update. And that took me to some fascinating new info at fivethirtyeight. But if you want the best source of all, I recommend the newest Stacy Smith et al study from USC Annenberg and her 2016 TED talk.

Why the Greek Yogurt Invasion Was More Than Yoplait's War