Why the Greek Yogurt Invasion Was More Than Yoplait’s War

People say they don’t really like Greek yogurt. It’s sour and thick while the traditional kind is sweet. But because we think it is a healthier, more authentic alternative, most of us want to like it. And that has been a problem for Yoplait.

Faced with unexpected competition from Chobani and Fage, the Yoplait people decided to create their own Greek yogurt. The names they proposed ranged from Ygefa! (it means health in Greek–they added the punctuation) to Yoganos (made-up but Greek sounding). The final decision was Yoplait Greek.

But It flopped as did all other Yoplait Greek yogurts: 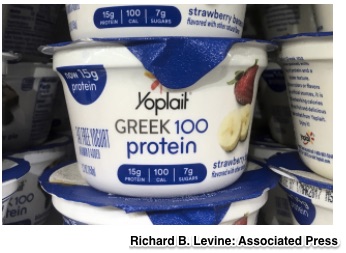 So now they are trying again. Hoping for a healthier, more genuine identity, the plan is to return to Yoplait’s French roots. Their new yogurt is Oui.

Where are we going? To the decline of top food brands.

During the 20th century, as consumers became more affluent, healthier foods became more popular. But the story was very different from today

One hundred years ago, we wanted factory-made food. With bread for example, home baking took too long and neighborhood bakeries were unsanitary and inconsistent. While people associated local bread with dark and dirty preparation, they imagined glistening equipment in large factories. Considered an innovation in 1928, factory-made sliced bread was said to create a “thrill of pleasure” when housewives saw each perfect slice. Similarly, consumers appreciated the safety, convenience and affordability of foods that were flash frozen, canned and contained preservatives.

Now though, with our quest for healthier foods taking us in the opposite direction, larger firms are losing market share.

As a large firm that mass produces, has many customers, and few competitors, an oligopoly needs to differentiate its product from everyone else. Traditionally, as we move to the right along the following competitive market structure continuum, the power of the firm accelerates, market entry and exit become more difficult, and price competition is less likely.

But Yoplait tells a somewhat different story. Oligopoly power from old food brands is slipping. Below you can see that the market share of the top 25 U.S. food and beverage companies was down from 66% to 63% between 2012 and 2016:

The reason? We could say that old food brands ranging from Kraft Mac and Cheese to Nestlé’s Nesquik occupy a shrinking middle. The high end consumer is looking for more health and authenticity. Meanwhile, at the low end, house brands are proliferating. In addition, with the internet and social media, smaller firms can cheaply tell their story to a large audience.

So yes, Oui is about much more than yogurt.

My sources and more: Always interesting, NY Times journalist Charles Duhigg told the Yoplait story. Then, soon after, WSJ wrote about the decline of other big food brands as their follow-up to a previous article. Together the three articles illustrate the entire old food brand picture.

Please note that several sentences from today’s econlife were published in previous posts.