Asked why she was paid less than her male co-stars, Jennifer Lawrence said that during salary negotiations, “I didn’t want to seem difficult or spoiled.” Later though, she “saw the payroll on the internet and realized every man I was working with definitely didn’t worry about being difficult or spoiled.” 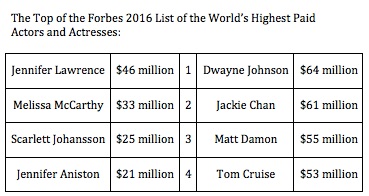 Citing her negotiating deficit, Jennifer Lawrence took us to the tip of a Hollywood gender gap iceberg.

In Front of the Camera

The first place to find the gap is in front of the camera. Led by Dr. Stacy Smith, a group at the USC Annenberg School does an annual female movie “census.” When they calculated the number of male and female speaking roles, the ratio was 2.3 men to each woman.

Their statistics show that since 2007, women say far less than men in the movies. And even when a woman is the protagonist, still the men around her have more of a speaking presence:

One reason for fewer women in front of the camera is the men who are behind-the-scenes. Among the film industry’s directors, writers and producers, women are in the minority:

However, when women make the movies, those “invisible” women appear:

As behavioral economists, we could say that we have an expectations bias. When industry leaders imagine a director or a blockbuster film, they think of men.

Dr. Smith suggests we can start to erase that bias by gradually adding women to scripts:

Thinking of yesterday’s International Women’s Day, we should articulate practical gender gap solutions like the margins where we need to add women.

And then, once more film industry women enter a pipeline leading to the top, surely so too will their salaries.

My sources and more: To start with a quick overview, I recommend the Hollywood gender gap podcast from More or Less and this TED talk from Stacy Smith. To complete the picture, you might enjoy this fivethirtyeight article and Dr. Smith’s research. Also, please do note that while certain tables and graphs use data from ten years ago, Dr. Smith said recently that all have remained relevant.

The North/South EU Divide For Beer and Wine Consumption

Why Measuring Happiness is Tough