Today’s #TBT will look at the days when men paid for the first date.

When the check comes at the end of a first date, so too might “the reach.”

The reach comes from a hand that slightly extends toward a recently arrived bill for dinner or just coffee. It could be a genuine reach for the tab. Or, it could be a move that is supposed to evoke a similar but more aggressive response from one’s date.

Anecdotal evidence indicates that the response to the reach has changed. Several years ago, everyone assumed the man would get the bill. More recently, we are not sure.

In “Who Pays for the Date,” 17,607 survey respondents conveyed conflicting opinions. The one definitive conclusion was that men still pay more. Deciding who should pay, though, was a different story:

Before women increasingly joined the labor force, it remained the man’s job to pay for the first date. The implicit message could have been a blend of dominance and chivalry. Surely not realizing it, he was signaling that he would be a good breadwinner. 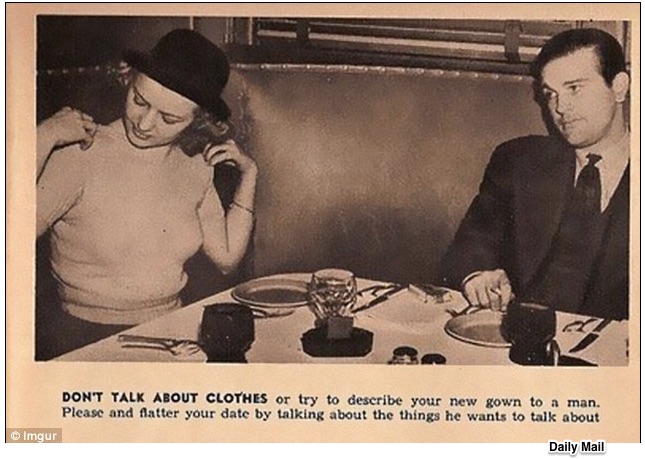 Dating norms paralleled the family roles that followed courtship. Described by Nobel Laureate Gary Becker (1930-2014), the traditional family unit was like a factory. It too had a division of labor, inputs and outputs. With the male as the breadwinner and the female as the domestic specialist, we have our division of labor. Then together, they use their land, labor and capital to nurture children.

With the onset of feminism, the pill, and more women with college degrees, female labor force participation rates increased and began to shift our dating norms. (The gray lines are recessions.):

For dating and marriage, appropriate behaviors–social norms– are changing. As economists Justin Wolfers and Betsey Stevenson have pointed out, increasingly, marriages are about companionship rather than children. Instead of production complementarities, we have consumption complementarities.

Perhaps the ambivalence in “the reach” is about the shift to consumption complementarities. It is one example of how women’s new economic role is changing social norms.

So, while #TBT usually looks back with nostalgia, today I do not. You?

My sources and more: This WSJ article on “the reach” is a good introduction to the dilemmas of the first date (which you probably already know). But for the data, this paper was ideal. Finally, during yesterday’s walk, I listened to and recommend this econtalk interview on gender.

How a Social Score Gets You China's Goods and Services

Lessons From the App Economy