The McRib is back…sort of.

The two most recent (documented) sightings were in Ukraine and Florida. And “Mikey” says he saw one yesterday in York, Pennsylvania.

Our story starts with a Nebraska meat scientist and a gourmet French chef.  The scientist is in the Meat Industry Hall of Fame (with Colonel Sanders) while the chef was famous for his “chicken in sweet butter with cognac Martell, Madere sauce, cream, and goose liver, accompanied by veal dumplings and hearts of palm covered in orange hollandaise sauce.”

Ray Kroc, McDonald’s CEO, hired the French-trained chef and the rest of the story is McRib history.  Saying he had to cater to American tastebuds, the French chef used the science of restructured meat to create the first McRib. Rather than a patty, he replicated a rib design. Then, he added 60 or so other ingredients and wound up with the McRib sandwich–pork, barbecue sauce, onions, and pickles on a bun.

Since 1981, McDonald’s has managed the McRib’s supply. Adding it to its restaurants’ menus and then removing it, McDonald’s makes sure that McRib fans always want more.

People wonder why McDonald’s doesn’t just leave the McRib on the menu. The reason might be how we perceive that extra bite.

One McDonald’s franchisee tells us that when the McRib first returns, he sells close to 200 a day. However, by the end of the promotion, anticipation plummets and his daily McRib sales drop to fewer than 50.

An economist would say that McRibs buyers are experiencing diminishing marginal utility because each new serving gives them less extra pleasure. That is when the item leaves the McDonald’s menu. By the time it returns, consumers again look forward to their first bite. 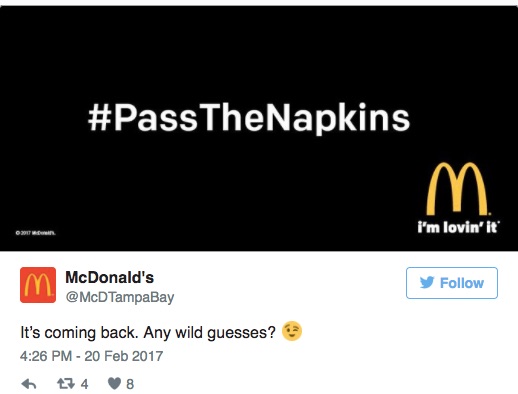 Or, as Freakonomics’s Steven Dubner explains it, McDonald’s just has to wait long enough for him to forget how bad it is.

My sources and more: Chicago Tribune Magazine had the history of the McRib and the McRib Locator tells where we can find it. Meanwhile Freakonomics looked at pork prices and this Businessinsider slide show has “11 Amazing McRib Facts.” Most interesting though, was this NPR story of the McRib’s origin.

Several sentences in this post were previously published at econlife.

Why Corporate Taxes Are Never Simple