The Decline of Laissez-Faire

Perhaps it all began when President Lyndon Johnson called Wilbur Mills, chairman of the House Ways and Means Committee. “Wilbur, I’ve just been looking through the polls here, and I’ve only got a few weaknesses, and the worst of them is that I’m not doing anything for the old folks. I need some help from you.”

The result? During 1965 Congress passes Medicare. Two years later they project the program will cost about $12 billion in 23 years. At $110 billion, the 1990 total was close to 9 times what they expected.

Government payments to individuals are soaring:

Where are we going? To the decline of laissez-faire.

We could say that there are two basic reasons the government pays people.

One relates to producing a  submarine or being the president. Because you’ve created a good or a service, you get paid.

However, close to $2 trillion is allocated for producing nothing. Instead, we get checks from the government by satisfying the requisites of some program. Called transfer payments, those dollars have been described as a huge money transfer machine. With Social Security, the transfer is from current workers to retirees. In a list of transfer payments, we could cite Medicare for people 65 and older and Income Security that includes unemployment insurance and housing assistance.

Here is another way to look at it: 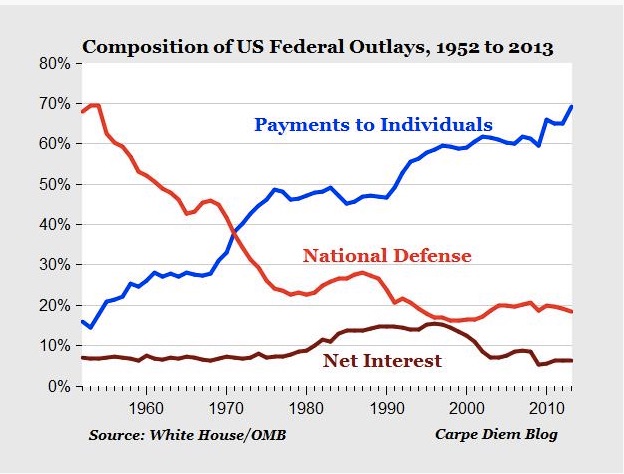 The U.S. rank in the Index of Economic Freedom has sunk to #17 because of rising transfer payments, Yes, its grade was high for business and labor freedom but much lower for government spending and fiscal health.

With darker green indicating the most “freedom,” this heat map displays the average scores for 186 countries.  Hong Kong, Singapore and New Zealand were at the top while the U.S. was #17.

The four large categories covered by the Index are:

Observing the U.S. government spending so massively on transfer payments, Smith surely would have been concerned. But he was a wise man who also would have cited the opportunity cost of reducing government support.

My sources and more: To decide the tradeoffs you prefer, a good starting point is this article from Investor’s Business Daily, this blog from Mark Perry, and the Heritage Foundation’s Index of Economic Freedom. Add to that the FRED/BEA figures and this econlib bio of Smith and you get enough data to assess laissez-faire.

Please note that several sentences in this post were in a previous econlife entry.