The U.S. News Best Country ranking is about perception. Given 73 characteristics about 85 countries. approximately 17,000 participants just had to express their impression. U.S. News tells us that the Best Country attributes should let us decide whether the country is “successful.”

When a country was consistently cited for the same attribute, after some weighting and a bit of math, for that characteristic, it received a high ranking score. Then, those attributes were grouped into 10 categories. Although U.S. News has a paragraph, I’ve selected just two or three words that describe the category:

Among the 78 countries, Switzerland (officially called the Swiss Confederation) was first and Belarus was last: 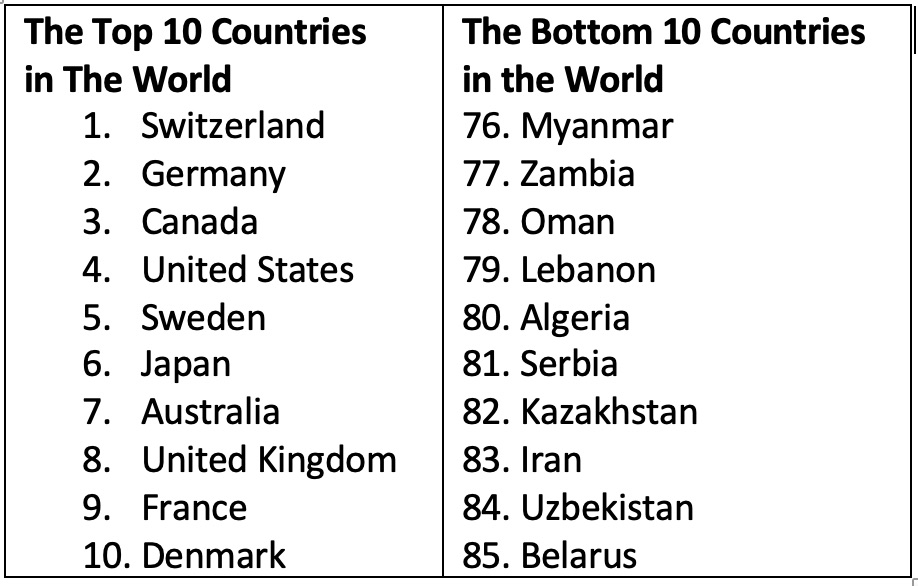 Whereas Canada snagged the 2021 top spot with high Quality of Life and Social Purpose scores, Switzerland is the place to do business: 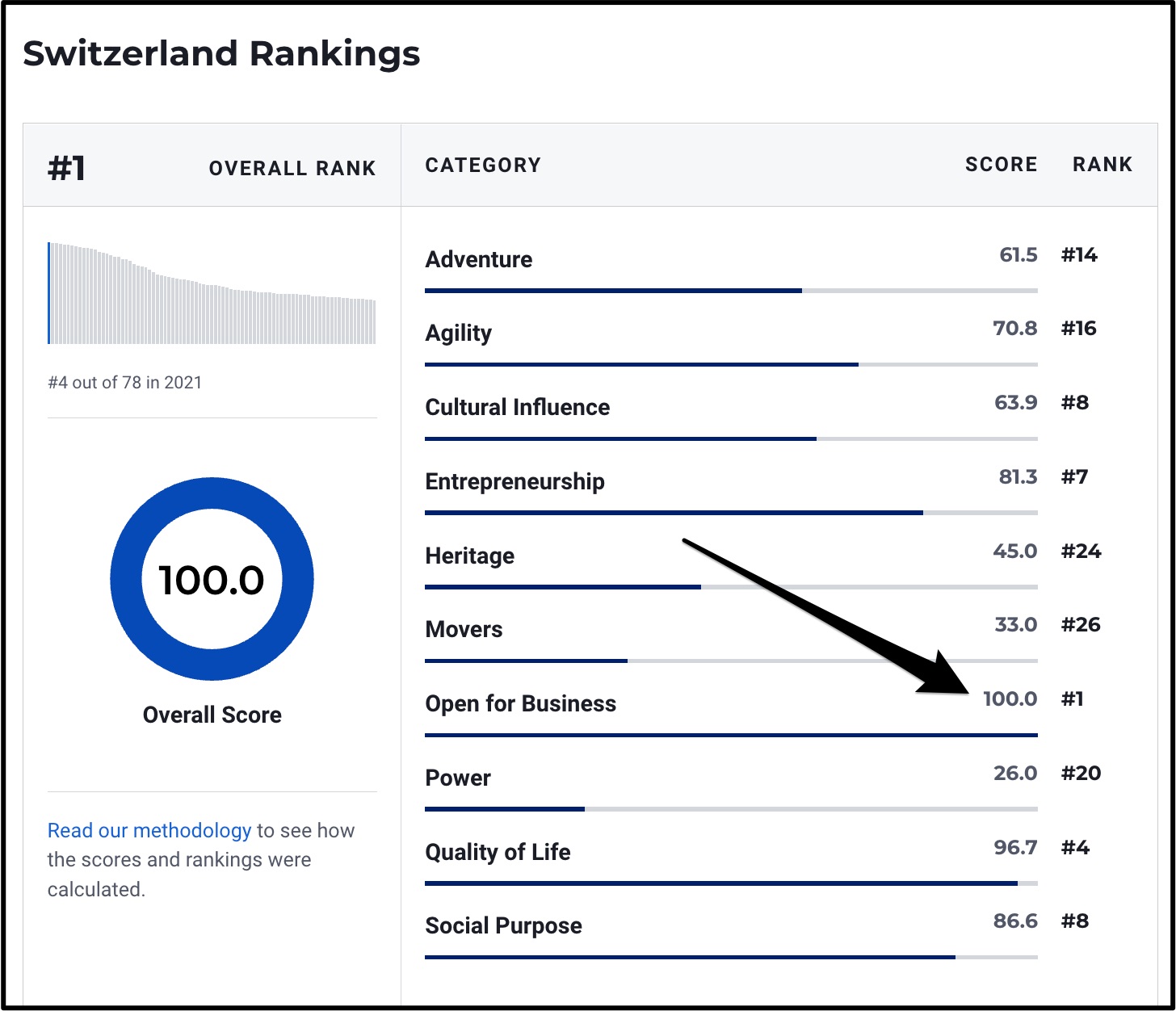 Meanwhile, the U.S. is #4 with 100s for Power and Agility, offsetting a lower ranking for adventure and movers: 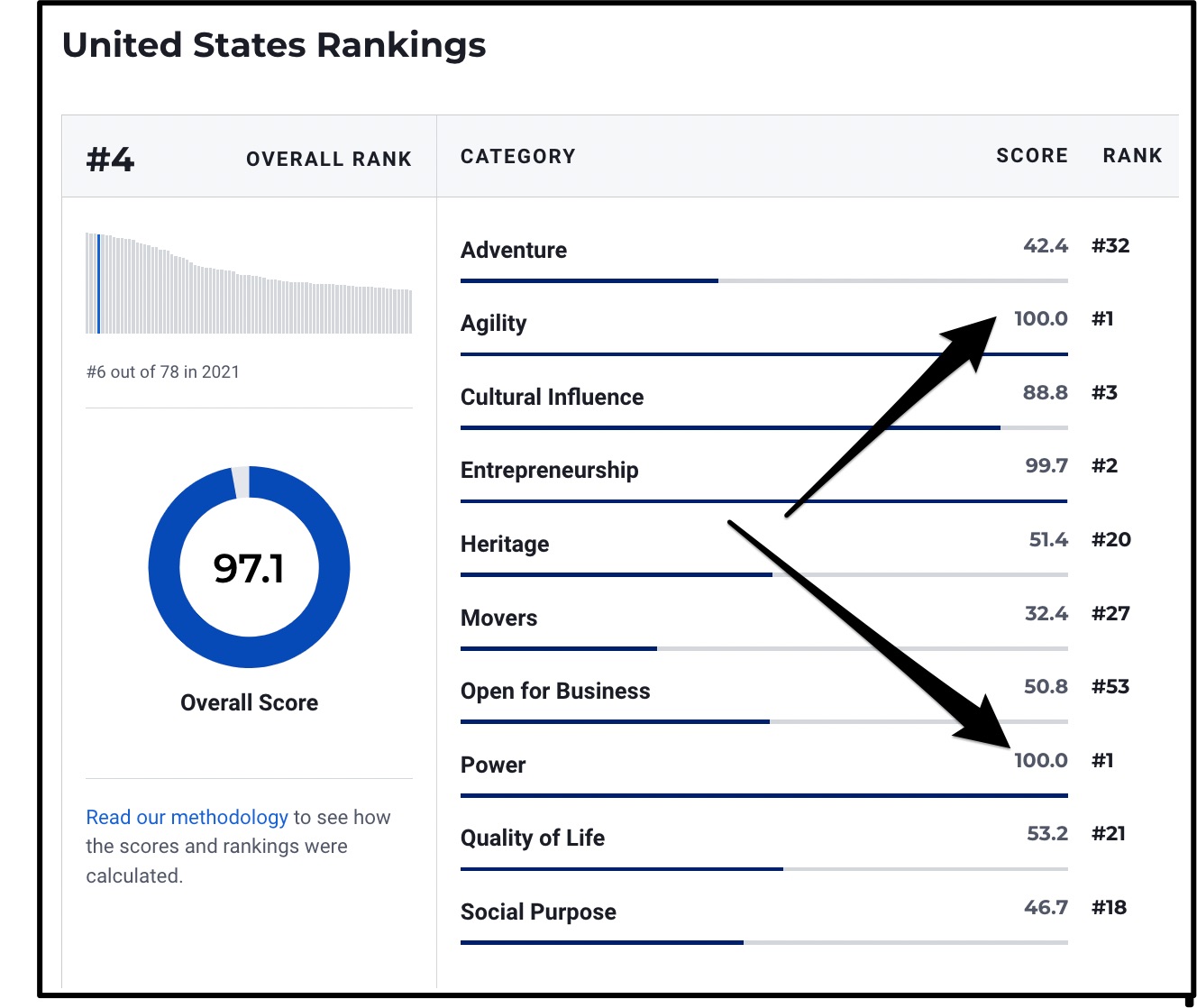 As for other ranking categories, Sweden and Norway were #1 and #2 for women. Also interesting, although I would expect, for Power, the U.S., China, and Russia were the top three. By contrast, I was surprised to see that the Start a Business rank was led by China, India, and Thairland.

Long ago in The New Yorker, Malcolm Gladwell decimated college ranking systems. Pointing out that a rating number obscures the inaccuracies on which it is based, he trashed the U.S. News and World Report college issue. An alternative and perhaps more accurate method could be identifying people’s “revealed preferences.” For college ranking, revealed preference tallies where applicants were accepted and where they went. By compiling the data for thousands of students, statisticians can create a ranking that reflects what students believed were the best colleges.

Similarly, the best countries tally avoids collecting a huge volume of substantiating data. It does not need a statistic that proves a country is agile or adventuresome or good for business. Instead, it depends on perceptions. Your ranking  is based on opinions. Or, as James Surowiecki might have said in his book, it is based on the crowd’s opinions.  Like the market provides the Wisdom of Crowds by aggregating the decisions of many individuals, so too does revealed preference convey insight about countries.

Indeed, we could say that the U.S. News ranking criteria provide insight if we want to know what people think of us.

My sources and more: Thanks to the Knowledge at Wharton for alerting me to the U.S. News Best Countries ranking. From there, I recommend the Gladwell article and James Surowiecki’s The Wisdom of  Crowds. (Please note that all tables and graphics are from U.S. News and World Report as is my featured image of the Swiss peak, the Matterhorn. In the picture, lamps light the path of its first climber.)

What Economists Say About Pumpkin Spice

How To Make a Hog Happy