The Message From The Most (and Least) Likable Emojis

According to the group that oversees our emoji population (Unicode), this year’s most popular emoji is Tears of Joy.

Below, with size showing frequency, Tears of Joy occupied 5 percent of all emoji use. You can see that the Red Heart came in second before what Unicode said was a precipitous drop to third place. Meanwhile Pleading Face (to the right above Thumbs Up) jumped from the 97 spot to 14:

Where are we going? To how emojis are more than a digital language.

Though relatively small, the Plant-Flower subcategory of Animals & Nature is a favorite. Meanwhile, rather large at 258 choices, flags are least popular. The message here seems to be that an item’s image is less compelling than a broader “communicative concept” like emotions. Still though, as popular emojis, rocket ship and flexed biceps are “tops in their class.”

Anyone can send the Consortium a proposal for a new emoji. To make it through their approval process, Unicode suggests the potential for multiple usages, symbolism, and use in sequences. Also though they do want to “break new ground.” And, because no emoji will ever be removed, the concept needs to be long lasting rather than a temporary fad.

Among 2021’s 37 new emojis, Melting Face is most anticipated. Approved during late September, it will soon be accessible on major platforms. A google Creative Director and an associate college professor conceived the design in 2019.

Observers have explained that Melting Face’s idea of a solid becoming a liquid connects to our pandemic and climate anxieties: 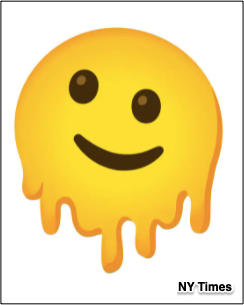 Because the Unicode Consortium preserves emoji consistency, we can say that it satisfies our market’s need for standardization.

Looking back to 18th century France, you can see why commerce needs standardization. Between villages, the size of a pint could have varied by 20 percent. And that was just one metric. Imagine dealing with many when buying and selling merchandise.

It helped the market considerably when two scientists defined the size of a meter during the 1790s by calculating the distance from the North Pole to the Equator and dividing it by 10 million. Once they knew the size of a meter, they said the kilogram was “a cubic decimeter of rainwater at 4 degrees Celsius.” One result was a platinum kilogram cylinder. But the bigger impact was the standardization of a wide array of weights and measures.

We could say that NIST returns us to the Unicode Consortium. Like all standardized metrics, emoji consistency optimizes their usage.

My sources and more: Thanks to The Hustle for reminding me that it was time for an emoji update. From there, the Unicode Consortium had all you could want to know about popular emojis (and still more). Then, refreshingly, the NY Times focused on the Melting Face.

Please note that sentences from today’s Bottom Line were previously published at econlife. Our featured image is a screenshot from CNET.

A (Temporary) Whopper of a Price Drop From Burger King

The Life of a Christmas Tree: From Seedling to Six-Footer