When New Roads Have Cost Overruns and Benefit Shortfalls

More than any other federal agency, the Department of Transportation (DOT) will allocate funds from the new trillion dollar infrastructure bill. Through grants and the Highway Trust Fund, the DOT will select where the money winds up. Its main destination will be road and bridge upgrades: 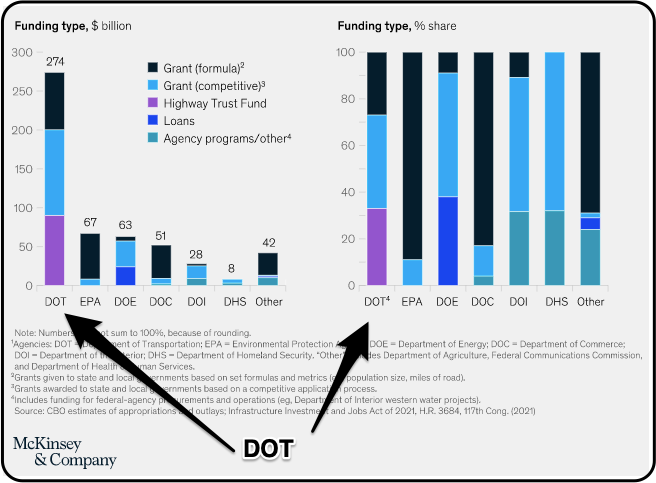 Happily, we can confirm that the DOT requires benefit-cost analysis (BCA) from grant recipients. But somewhat sadly, we should add that a recent report concludes that BCAs are inaccurate.

Whereas every state will receive infrastructure spending, California and Texas will get the most money because they have the largest network of roads and bridges. The following scale, by state, represents billions of dollars: 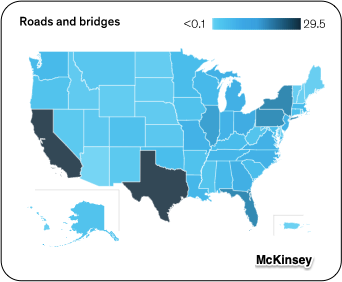 To assess the efficacy of benefit-cost analysis, researchers recently reported data from 2,062 public investment projects in 104 developed and developing countries. Their focus though was primarily the U.S. and Europe, and 327 projects. Then, judging costs, they recorded overruns. For benefits, their criteria were the planners’ goals for the first year.

With rail, they identified a 40 percent cost overrun (the 1.40 in the “Average” column). With roads, it was 24 percent, and bridges, 32 percent. Whereas cost was consistently underestimated, the projected benefits, every time, exceeded the results. At 4 percent, (1.00 minus .96), the bridges’ and roads’ shortfall was the smallest:

Our Bottom Line: The Benefit-Cost Fallacy

The goal of  BCA is efficient resource allocation.

However, when benefits fail to compensate for cost overruns, we can question the wisdom of the project. Even looking at the long run, researchers observed that cost overruns and benefit shortfalls remained. As a result, they suggested that most transportation proposals should be reconsidered and perhaps rejected. Especially in a developing nation, the miscalculation can lead to catastrophic waste.

They call the miscalculation the cost-benefit fallacy. The usual causes of cost overruns involve delays during which prices rise and unexpected problems emerge. Since they plague most projects, planners know they happen. Consequently, we have to move to behavioral economics. We should just say that the real cause of cost overruns and benefit shortfalls is optimism.

So yes, when we see hundreds of millions of dollars of estimated spending on infrastructure, we should bake in the optimism bias. And yet, skimming through the DOT’s cost-benefit requirements, I found no “optimism warning.”

My sources and more: The ideal complements, this McKinsey Report, this paper, and its Conversable Economist summary paired perfectly.  Then, completing the picture, I found the Department of Transportation’s benefit-cost analysis requirements.

Our Weekly Economic News Roundup: From College Majors to Cryptocurrencies