When One Foot Is Better Than Two

During construction, a high rise building on the approach to an airport had to lose a floor. The reason was the length of a foot.

Or…we should say the lengths of a foot.

Why We Need To Lose a Foot

Then, in 1959, the foot changed again. Becoming .0000002 percent shorter, its length switched to an international standard.

The result was two feet. Many states retained the 1893 survey foot, others observed the 1959 revision, and some refused to choose: 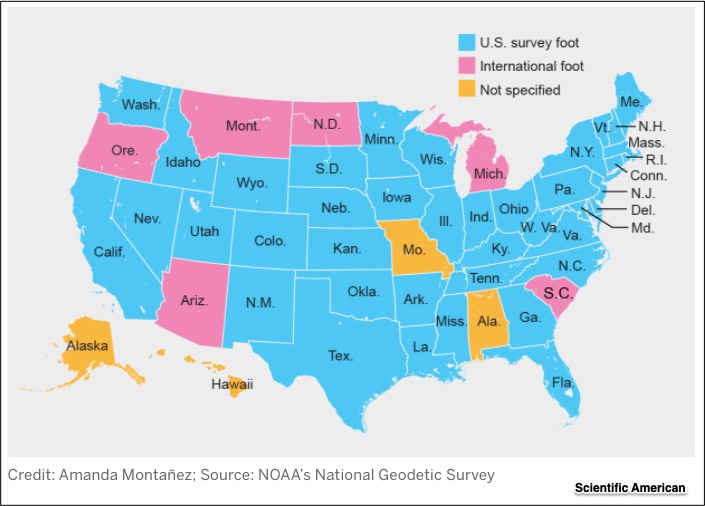 It can get confusing because most engineering projects use the international foot while mapmakers and infrastructure designers prefer the survey foot. We also have government agencies such as the U.S. Park Service or the FAA working with the 1893 survey foot in Arizona or South Carolina and other international foot states. Although the two feet differ by very little, it matters when confusion can become catastrophe (like when the top of a building is too close to a landing path).

As economists, two different feet remind us of the need for standardized weights and measures. It can return us to 18th century France where assorted fabrics, grain, and wood each had their own metric. If you sold a pint in several places, the amount could have varied by 20%. King Henry I of England reputedly defined a yard as the distance from the tip of his nose to his thumb when his arm was fully extended.  Close to 450 years later Queen Elizabeth I proclaimed that, “foure graines of barley make a finger, foure fingers a hande, foure handes a foote,” Consequently, 16 fingers make a foot and three times that make a yard.

The quest for standardization progressed during the 1790s when two scientists quantified the meter by calculating the distance from the North Pole to the Equator and dividing it by 10 million. Then, in 1893, by using the meter to formalize the length of the foot, we took a huge leap for the market system. Once weights and measures could be standardized, transaction costs–the hassles that slow an agreement on price and quantity–would be minimized.

Now, by eliminating a foot, the National Institute of Standards and Technology will take another step. From January 1, 2023 onward, the 1893 survey foot will become obsolete while the 1959 international foot will remain.

My sources and more: Scientific American, the NY Times and 99% Invisible had the stories about the foot. Then, going to the source, I saw what NIST said.