A Lesson for Rail Transit From the Eastern Shuttle

Long ago, before the TSA existed, many of us could arrive at New York’s LaGuardia Airport, coffee cup in hand, buy a ticket on the plane, and arrive in Washington D.C. just an hour or so later. Taking off every two hours, the Eastern Air-Shuttle always had a plane in reserve so when one was full, passengers had the back-up. 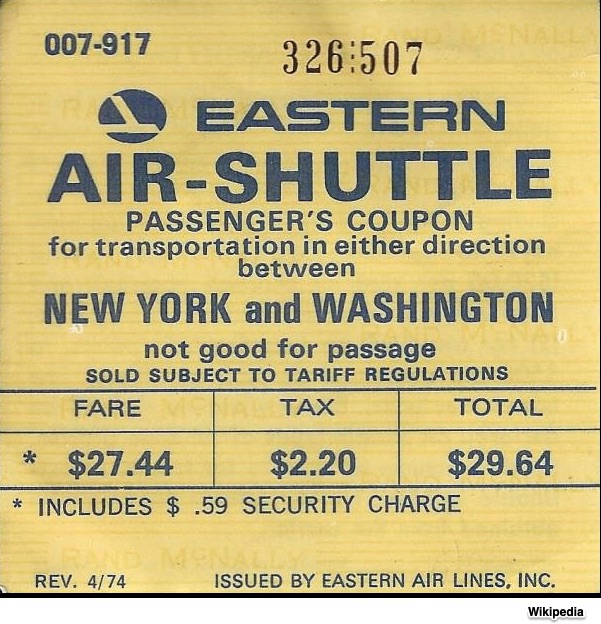 It would be nice if high-speed rail replicated the air shuttle experience. Arriving at a NYC train station, we could buy a ticket, board within 15 minutes, and speed to Washington D.C. at 311 miles an hour. The trip would take an hour.

For transit in the United States, we can contemplate what should be done. The Transit Costs Project at New York University has some ideas. All are based on what is possible. We just need to look at what other countries have already accomplished.

I’ve copied a blog chart from the project. The basic models come from Japan, France, Germany, and China’s copycat mixture. In the summary, Japan’s system is compared to a subway, France, an air transport network, and Germany, regional rail. Through its system, at 2.3 billion annual high speed riders, China far exceeds all others’ numbers.

Each system has characteristics that the U.S. can adopt: 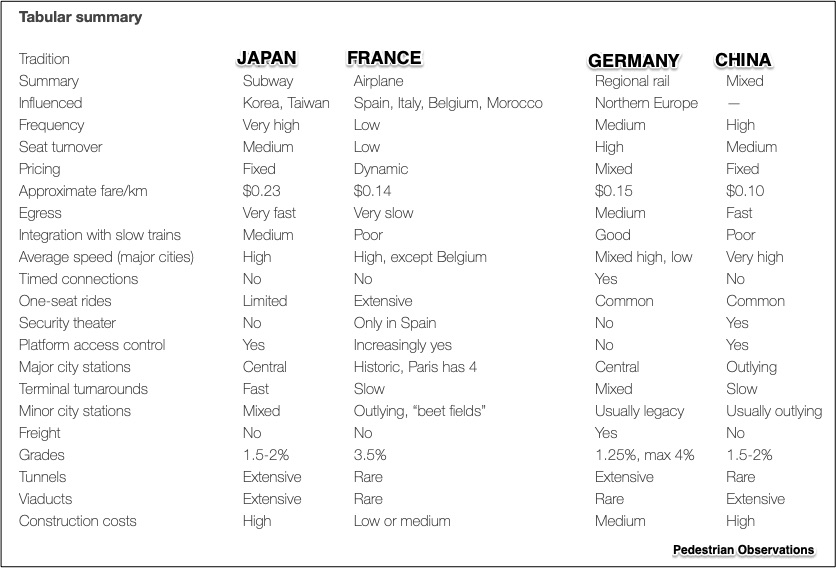 U.S. high speed rail projects have price tags in the mega-billions that have slowed their progress. The NAR–North Atlantic Rail Plan projects spending $105 billion. Its advocates envision a route that will stimulate New England’s economic development. In green, its heart is a high-speed line from New York to Boston: 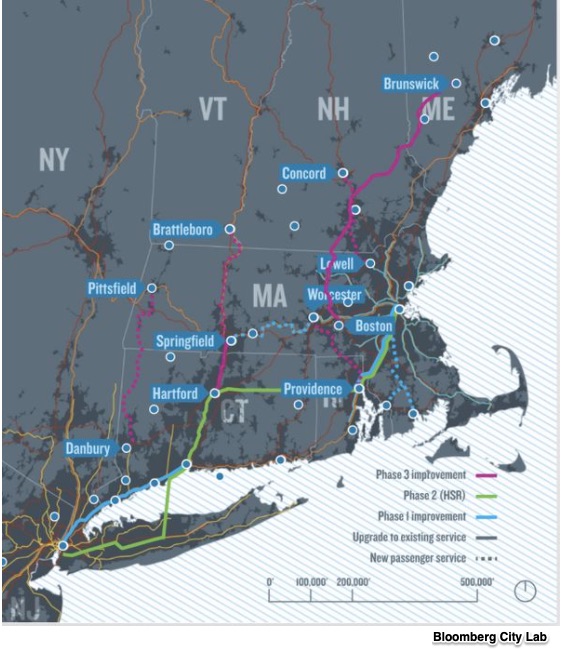 Meanwhile, in Texas, linking Houston and Dallas, the cost of high-speed rail would be close to $20 billion. Connecting Vancouver, Portland, and Seattle in the Pacific Northwest, a high speed rail link could be $40 billion. In California, for an ongoing project that ultimately will connect Los Angeles and San Francisco, the dollars have shot up to $80 billion.

Right now, Congress is allocating $30 billion to the Northeast Corridor. Destined to pay for Gateway NJ, the funding is for refurbishing one tunnel, building a second one, restoring track, and expanding Penn Station.

It sounds like a 20th century project in a 21st century world.

Referring to creative destruction, I wonder if Joseph Schumpeter (1883-1950) could explain why the U.S. is sticking with the past rather than leapfrogging rail transit into the future. As he points out, replacing the old with something new is a painful process. With high-speed rail, the trains, the track, the tunnels, all change as would the jobs, the systems, the whole infrastructure. And now, we have to inject politics, too.

With rail, the goal is fast travel, low fares, high frequency–just like the Eastern Air-Shuttle.

My sources and more: Because of a Slate trains podcast, yesterday’s walk was much more interesting. Next, sadly, some reality set in through this Bloomberg City Lab article.and this NYU Transit Cost Project blog. We also have the facts for the Washington, D.C. project, Texas’s plans, and the Pacific Northwest project,. But if you are more interested in an economic thinker, Joseph Schumpeter is always fascinating.

Renters, Landlords, and the Eviction Moratorium

Where Are the Olympic Women?