Why Renaming Countries and Cities is Costly

During 2018, King Mwsati of Swaziland said the new name of his country would be eSwatini. He was switching because he wanted to erase reminders of colonial rule and eliminate mix-ups with Switzerland.

The downside though is the cost.

The cost of replacing Swaziland with eSwatini has been estimated at $6 million.

Publicly, it includes new signage for government properties, for roadways, a new domain name, and a flag (our featured image). The tourist board has to rebrand and create new maps. A frugal official said to use up the old stationery rather than discarding it. In addition, existing coins and bank notes would remain valid as would international agreements.

Privately, businesses need new stationery and signage, new marketing, website adjustments. On the global level, we can think of mapping sites. Checking Google Maps, I saw eSwatini as the country’s name but then a map created by a “user” still used Swaziland.

eSwatini is located near South Africa: 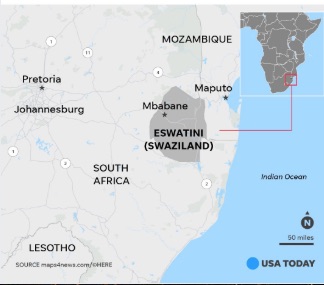 Like eSwatini, places in India also wanted to erase the British names that echoed their colonial past. Once Calcutta became Kolkata in 2001, businesses named after the city had to decide what to do. The Calcutta Electric Supply Corporation kept its old name even though it supplied Kolkata with electricity and students still attended Calcutta University. Somewhat similarly, when Bombay became Mumbai, residents, business owners, and the city needed to make countless changes.

A long list of cities have new names. New York City used to be New Amsterdam and Austin, Texas was briefly Waterloo. Istanbul had been Byzantium and then Constantinople, while Saigon is now Ho Chi Minh City. In South Africa, during February, Port Elizabeth became Gqeberha.

Imagine the tax dollars that were spent for these changes as well as the business expenditures. Looking at the money, the time, the tangible and intangible costs, an economist could say that renaming creates a slew of negative externalities. It has an impact that ripples to parties quite distant from the original decision makers. Also though, especially on the political level the externalities can be rather positive.

And that returns us to eSwatini and its new identity.

My sources and more: Thanks to Business Daily for a podcast that alerted me to the impact of a city’s name change. From there, I discovered more on the Port Elizabeth story through CNN while NPR focused on India. As for eSwatini, the BBC and this blog had the details. And finally, this article shows why renaming just one street can be expensive.