At home because of Covid, many of us have been busy in our backyards. We’ve needed more seeds, tools, and gnomes.

At one garden center in the U.K., they’ve not seen a gnome for six months. Because of the uptick in gardening, Suez Canal delays, and less plastic, stone, and concrete, we’ve had a monumental shortfall in the gnome supply.

Those shortages are about more than gnomes.

Last year, our supermarkets had empty toilet paper and sanitizer shelves. We needed more aluminum cans and pepperoni. In addition, chip shortages have constrained industries that range from cars to toasters to smartphones.

At Stanley Black & Decker, orders last April for utility knives, tape measures, and wrenches plunged by 40 percent from a year earlier. Then, instead of going down, orders rose as surprised retailers were selling 30 percent more Stanley products than the same time in 2019. Still though, wary of new orders, they initially avoided replenishing inventories.

At the same time, manufacturers have had a tough time keeping up with orders for appliances, furniture, and cars. Stores don’t have enough barbells and kitchen mixers. Boat dealers were surprised to see their sales jump.

It all adds up to an economy that is somewhat out of whack. We don’t even have enough ketchup packets.

With personal consumption outpacing supply, consumer spending was up 6.4 percent in 2020 while domestic production sunk by 8.4 percent: 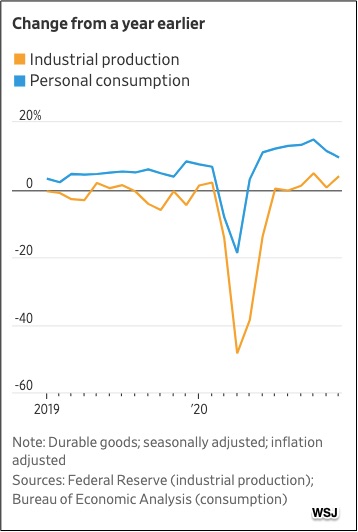 But there might be more to the story. Those shortages could be hiding inflation.

Economist Justin Wolfer suggests that we have been understating inflation. Collecting prices as though all is normal, statisticians ignore shortages. Shortages, though, diminish the variety that usually results in an overstated increase in the cost of living. In other words, when we cannot buy one item, we tend to buy something in its place.

As a result, the reduction in what we can buy is actually a hidden increase in the cost of living. The absence of a gnome is a signal that we could have more inflation than we think.

My sources and more: Thanks to the Indicator for reminding me of the gnome shortage. From there, the BBC, FT and WSJ had more about pandemic shortages. Then, economist Justin Wolfers put it all together in this NY Times Op-Ed.

Why Renaming Countries and Cities is Costly