How the Best and Worst Airlines Are Different

The rules used to be that, for no extra charge, you could fly with your (untrained) emotional support animal (ESA). As long as you had a corroborating letter from a health professional, it was okay with most airlines. The pig or peacock or puppy just had to sit in your lap or under the seat.

Especially because there was no charge and minimal oversight, more and more ESA animals flew with their owners: 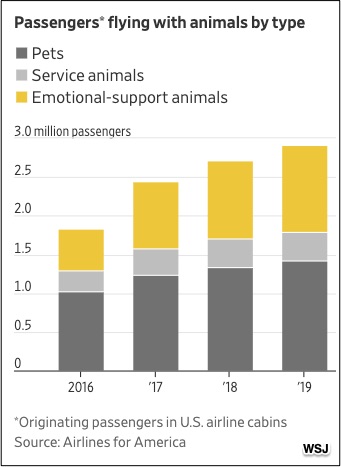 The major airlines just announced stricter ESA rules. Owners have to pay to transport their ESA animals with cargo or in a carrier under a seat. The exceptions are trained service dogs. Permitted everywhere, they have a training requirement and an IRS medical deduction. They don’t bite passengers.

The Best and Worst Airlines

Pets on a plane are just one way that airlines cater to passengers. They also don’t want to lose our luggage, cancel flights, or arrive late. Like ESA animals, refunds have become more of a concern.

For several years, Southwest and Delta have moved in and out of the #1 slot in the “Middle Seat Scorecard.” Meanwhile. American has been last among the nine major carriers. It was easier to arrive on time because of pandemic flight reductions and fewer fliers meant less lost luggage. Trending in the other direction, refund related complaints increased from 1,524 to a mind boggling 83,305.

The scorecard has the details:

Our opinion of the best and worst airlines can depend on how they want to compete. For the airline industry, it is tougher to generalize about competitive strategies because market behavior can depend on the route. Still though, we are close to oligopoly because the firms are large, they have pricing power, and market entry and exit can be difficult. And, we can generally say that they all, in their own way, try to achieve product differentiation. After all, we know how Southwest differs from United and JetBlue.

On a continuum, we start with the most competitive markets on the left and then see increasingly powerful firms as we move closer to monopoly:

I guess that letting an ESA peacock on a plane was a way to distinguish your airline.

My sources and more: When I took a peek at the Scott McCartney “Middle Seat” column, I was delighted to find the annual airline quality report. Then, looking for more about airline amenities, I wound up with the New Yorker ESA article and the update from Mr. McCartney and NPR.

How Free Stock Trades Can Be Expensive