Six Facts: Getting to Know the Superrich

The wealth tax that was proposed during the Democratic Party primary debates has not resurfaced. Today, let’s take a look at whether the idea works.

But first, who are the superrich?

To be included in the list, your wealth needed to exceed $2.1 billion.

3. A majority of the individuals in the 2018 Forbes 400 made their own fortunes. 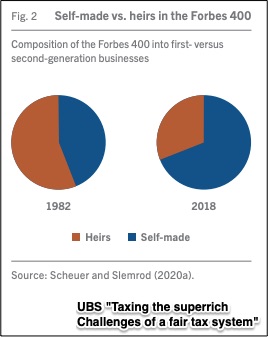 4. Based on changes in income, someone in the list this year could be gone next year.

There was considerable “churn” in the Forbes 400 list when we use income as our metric. Looking at 1992 to 2014, 138 people remained in the Forbes 400 for 10 or more years while 3,262 were there once. Those income swings related, for example, to the windfall received from selling a business.

5. However, wealth is more enduring.

In 2018, close to 60% of the individuals on the list were there for 10 years. Whether self-made or inherited, wealth was retained: 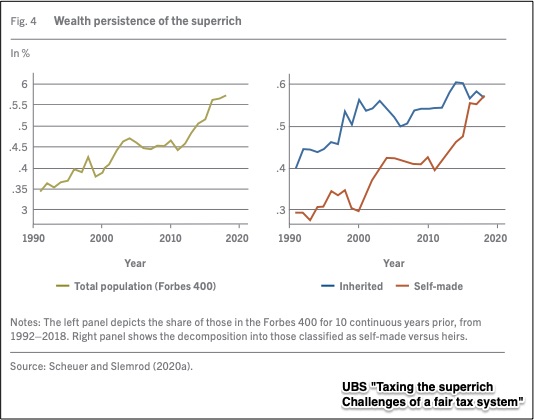 6. Yet still, income is taxed almost everywhere rather than wealth.

While the following tax rate graph obscures differences among OECD countries that people actually pay in income and estate taxes, it does convey the big picture:

Our Bottom Line: A Wealth Tax

A dozen OECD countries have levied a wealth tax during the past 30 years. Now though, Norway, Spain, and Switzerland remain.

Below you can see that three other countries with more limited wealth taxes are included in this table from the Tax Foundation. I’ve included it you can see what is actually taxed: 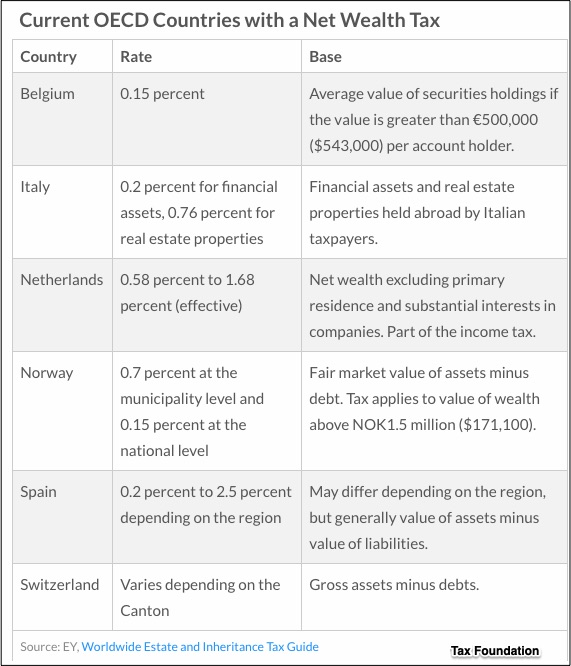 Known as the most successful revenue generator (based on self-reporting), Switzerland’s wealth tax has been around since 1840. However, Switzerland is the anomaly. In its 2018 report, the OECD cites the “efficiency costs, risk of capital flight, failure to meet redistributive goals, and concerns about high administrative costs” that have made most nations abandon the wealth tax.

So when the U.S. debates how to diminish inequality and increase tax revenue, a superrich wealth tax is a bit more complicated than it sounds.

My sources and more: Thanks to Timothy Taylor’s Conversable Economist for alerting me to this paper on the superrich. Then, for the details on wealth taxes, the Tax Foundation and BusinessInsider have the details. In addition, the OECD has more extensive wealth tax research and analysis in a 2018 report.

What Christmas Trees Say About the Holiday Economy

What Your Time is Really Worth