Why the Business Suit Is About More Than Clothing

The business suit dates back 400 years. Trying to appear more restrained, England’s Charles II switched to relatively conservative attire. He took a step away from the frilly sleeves, high heeled shoes, and wildly colorful clothing that reflected wealth. Instead, his toned down attire included a more somber coat, vest, and breeches.

I know, this is not quite today’s men’s suit, but it was where it started:

Even before the pandemic, suits were on the way out. But it got increasingly worse. In the U.S., if the graph had continued to 2020, the (red) plunge would have been a whopping 75 percent: 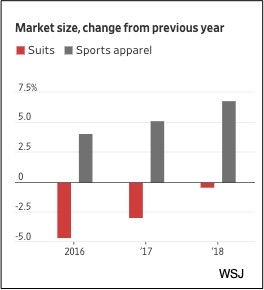 Perhaps because the following graph ends at the end of February, it did not look so bad in the U.K.: 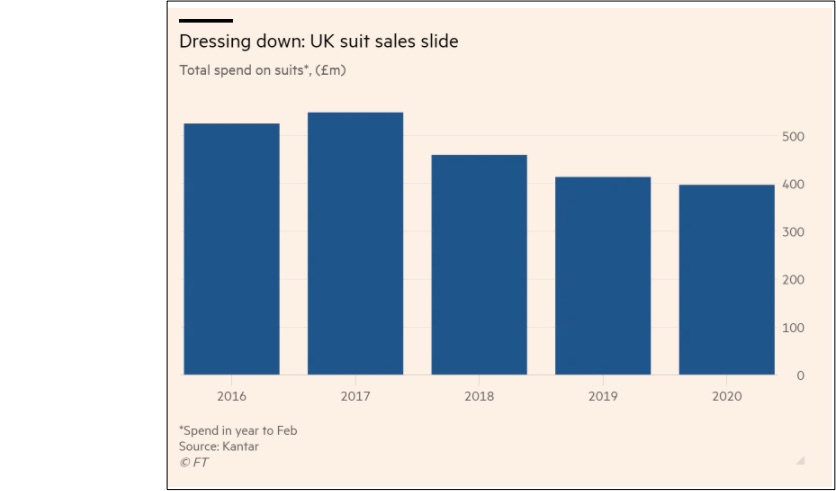 After Covid hit, retailers had to cancel orders, factories were shut, and deliveries delayed. During April, clothing sales dropped 79 percent. This summer, Brooks Brothers (around since 1818), and Tailored Brands, the parent of Men’s Wearhouse, and JoS. A. Bank, filed for bankruptcy. Other sellers of menswear that had folded or were on the brink of collapse included Neiman Marcus and Lord & Taylor. Looking ahead, industry gurus suggest that men will have two types of clothing. It’s either their fancy stuff or jeans and a T-shirt. When we return to work, jeans could be the new norm.

Meanwhile, sweatpants sales have been going through the roof. One small brand, that typically sold 46 sweats a day was selling 1,000. A tracking firm said that from 2019 to 2020, there had been a 36 percent increase in sweats sales.

Rather than just business suits, we are really talking about a restructuring that is sweeping across the entire retail landscape.

When economists use the word restructuring, they mean a shift. As existing land, labor, and capital in an industry become outdated or irrelevant, new factors of production replace them. The auto and the computer initiated massive restructuring.

For retail, we have disruptive technology speeding a process that also relates to changing taste, changing spending priorities, and a new competitive landscape. The results include a slew of bankruptcies: 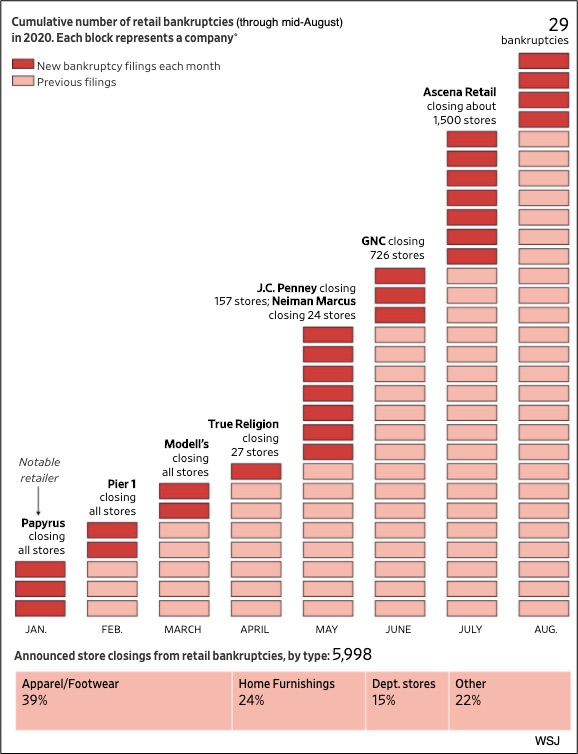 But of course nothing is really new. Charles II initiated a fashion restructuring 400 years ago.

My sources and more: When the Planet Money Indicator podcast looked at the demise of the business suit, I was delighted that it related to a NY Times Magazine article I recently read. From there, there were many possibilities. WSJ told us about ditching the suit as did FT, here and here.

Our featured image is from the NY Times Magazine.

Where Stimulus Cash Was Spent

An Update: Law and Odor on North Carolina's Hog Farms