An Update: Law and Odor on North Carolina’s Hog Farms

The law comes from a North Carolina court that is deciding if you can sue to stop a smell. So far the answer is yes and a $50 million fine that got reduced to $3 million. In addition, there were five recent verdicts against Smithfield Foods.

The answer was yes also in 1610. More than 400 years ago, an English Court told a hog farmer to remove his pigs. Establishing a neighbor’s right to “wholesome air,” the decision echos the North Carolina cases.

Where are we going? To hog farms.

We could call North Carolina hog country. Starting with two million hogs during the early 1990s, now there are more than nine million. Many of those hogs live on CAFOs–concentrated animal feeding operations.

Only Iowa and Minnesota have more hogs and pigs than North Carolina: 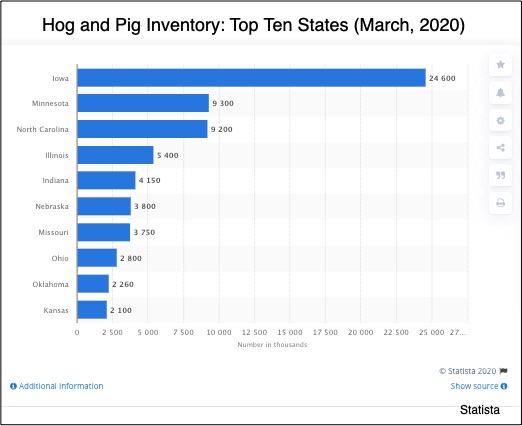 The problem is the hogs that live indoors. Producing 8 to 10 times as much fecal matter as humans, and urine also, one hog is a waste machine. Multiply that by the hundreds and even thousands of hogs that live together and you get lots of poop. In its podcast, Vox explained that the hogs live in long buildings with slatted floors through which the waste drains outside into huge lagoons. Eventually it decomposes and is used as a sprayable fertilizer mist. In 2018, there were approximately 4,000 hog waste lagoons in North Carolina.

According to one couple, the smell of a lagoon from a neighboring hog farm is giving them coughs and teary eyes. Because of the smell, their “ability to enjoy family gatherings, barbecues, outdoor chores, playing with children outside, and doing yard work” has disappeared. They cannot hang their laundry. 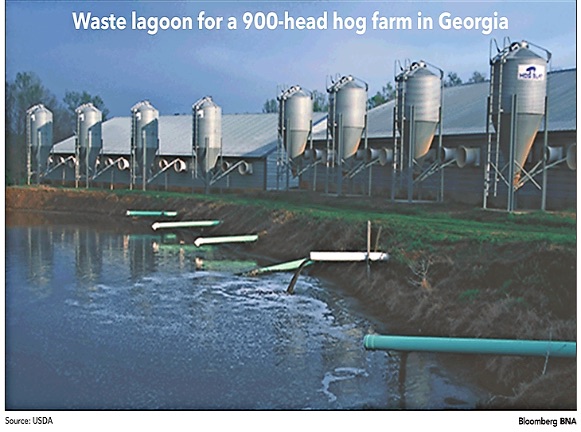 Responding, their hog farm neighbor says smell control will be prohibitively expensive and put him out of business. Furthermore, farmers ask if turkeys and chickens will be next. Their point? Farming can be smelly.

But there is more of a dilemma for the state. In addition to feed mills and company owned farms, the multinational firm Smithfield Foods runs one of the world’s largest pork processing plants in North Carolina.

In North Carolina, environmental groups have sought to mitigate the impact of manure lagoons. After considerable resistance, the state agreed to more air monitoring, water monitoring, and “tougher oversight” of permits for larger hog operations. They had also prohibited new lagoons while saying those that exist could remain.

A British economist, though, has a different idea. Arthur Pigou (1877-1959) suggested that a tax be levied on a good or service that creates a negative externality. Creating a dual benefit, it diminishes how much we use the item that harms us (the negative externality) while raising revenue that a community can use productively.

So yes, a Pigovian tax would raise revenue and create healthier farming communities. But North Carolina’s politicians have a large business that they want to protect.

Perhaps an economist would conclude that law and odor can take us to different incentives.

My sources and more: My update came from this Vox podcast, a New Yorker article, and the Charlotte Observer. Meanwhile, my original post had a slew of sources. I began with this WSJ article, found more facts in the LA Times, and then read a fascinating but dated MotherJones (my “law and odor” source) piece. As for the law,  Bloomberg is one possibility as well as the Modern Farmer. At econlife we have already discussed the smells coming from a California Sriracha plant.

Please note that we published sections of this post in a past econlife. And finally, I checked to see the difference between pigs and hogs. Hogs are just bigger pigs.

Why the Business Suit Is About More Than Clothing

The Sticky Side of Sports Viewership