The Sticky Side of Sports Viewership

A year ago, long before we ever heard of COVID, sports had become less “sticky.” Referring to how long we watch an event, the annual stickiness drop was three percent per game per sport.

Because the decline could mean less interest, lower revenue, and fewer ads, the numbers matter. And now, having missed months of viewership, everyone expected a gush of enthusiasm. They were not quite right.

Before a world of COVID-19, football, with revenue of $40 billion a year, was the world’s most lucrative sport. Next, for global revenue ranking in 2018, American football was second. Displayed by the righthand graph, perhaps player diversity is one reason for a sport’s higher revenue. As you can see, football (EPL) occupies the #1 spot: 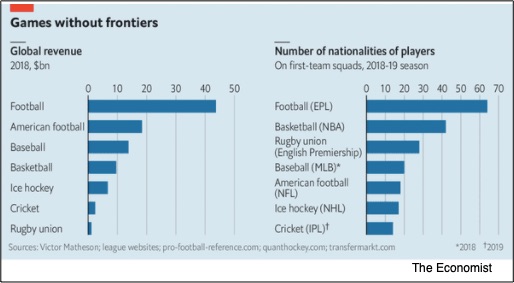 Pre-COVID, Cricket has been the poster sport for its ability to grow its revenue. Knowing that fans wanted shorter matches, it created the Twenty20 (T20) game that lasted three hours rather than eight hours. At the same time, it is trying to cater to the fans in India that they expect will become more affluent. Elsewhere, counting on multiple markets, basketball has doubled the number of teams in its World Cup with other sports like Rugby considering a similar plan. Everywhere, reinvention was what made the difference.

This year, we are not as worried about reinvention as with resumption. Even with stickiness slightly slipping every year for awhile, most of us expected a surge in viewership when sports events returned. Instead, we had a plunge:

And yet, there were increases:

Our Bottom Line: At the Margin

An economist might say that almost everything in sports happens at the margin. The “place” where you get something extra, the margin reveals revenue trends more accurately than an average amount. The margin spotlights increasing player diversity and the hike in the number of teams eligible for the finals.

Now the margin is the place to solve the mystery of shrinking sports viewership.

It all could relate to stickiness.

My sources and more: Thanks to Marginal Revolution for alerting me to a sports viewership post. Next, because my go-to sports economist is Victor Matheson, I discovered this article in The Economist.

An Update: Law and Odor on North Carolina's Hog Farms

October 2020 Friday's e-links: A Charming Brown Bear and a T.rex