Men at Work signs have always infuriated me: 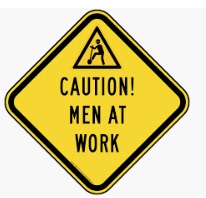 So too do men in crosswalk signs: 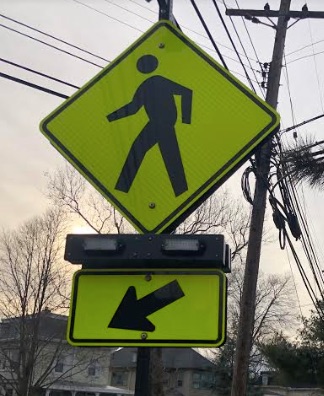 Now a Swiss official is doing something about it.

Geneva’s approximately 500 road crossing signs include a man digging a ditch, a man crossing the street. You know what I mean. All depict men. Now,  250 are being replaced by six different images of women. The women will be old, young, and pregnant.

These are the new signs:

Male crossing signs and “Men at Work” convey the same message. The crossing signs express only a male presence in public spaces. “Men at work” evokes images only of the men in the construction industry.

In the U.S. construction industry, somewhere close to 10 percent of the workers are women. But we can find many more of those women managing construction and in the office rather than in the field as, for example, drywall hangers or carpenters. Still, women are paid close to 95.7 percent (and perhaps more) of what the men earn. At an average salary of $38,890 that can be as high as $101,000 for structural iron and steel workers, the pay is good. So yes, it’s a field that could benefit women and yet their presence is not appreciably growing although the industry gained jobs at the end of 2019.

The person in charge of infrastructure in Geneva, Switzerland said the sign changes were necessary for changing the “mentality around gender equality.” A behavioral economist would have said the official was concerned with confirmation bias.

To explain confirmation bias, I like to cite a lab experiment where a professor told his students that some rats were smart and others, dumb although all were pretty similar. As he expected, the students’ lab results indicated the “smart” rats fared better than the “dumb” ones. The “smart” rats were friendlier and navigated a maze more expertly. Lab records also indicated that the students treated the “dumb” rats differently. Because they thought they would fail, they handled them less gently, and they did fail.

There is a parallel between the rats and the signs. The absence of female recognition can be a self-fulfilling prophecy.

On the other hand, more female crossing signs can reinforce the need to consider women’s needs when designing public spaces. “Women at Work” (or maybe “People at Work”) in road signs can create the expectation that a woman will want and get the construction job.

And then she will.

My sources and more: Somehow I stumbled on Le News, and Swissinfo. They had the infrastructure sign details. From there, CNBC looked at women with construction jobs, the BLS had the data, and this article discussed women in public spaces. But if you want an overview of women’s work, this NY Times article is ideal.

A Simple Look at the World's Most Complex Economies