Why Grandma is Smiling

We could say that we were worried about Grandma when Social Security was first created in 1935.

No need to worry now.

We know that Social Security is underfunded. The pay-as-you-go system means current workers pay for current retirees. There just won’t be enough workers funding payroll tax revenue to support all of those retired baby boomers (born from 1946-1964). The shortfall should start in 2035 or so when the trust fund created from surpluses is depleted. It could mean retirees get 80% of what is due them.

Below you can see the results if currently scheduled benefits continued. We would wind up with a massive tax shortfall for Medicare and Social Security according to a 2015 estimate from the Urban Institute: 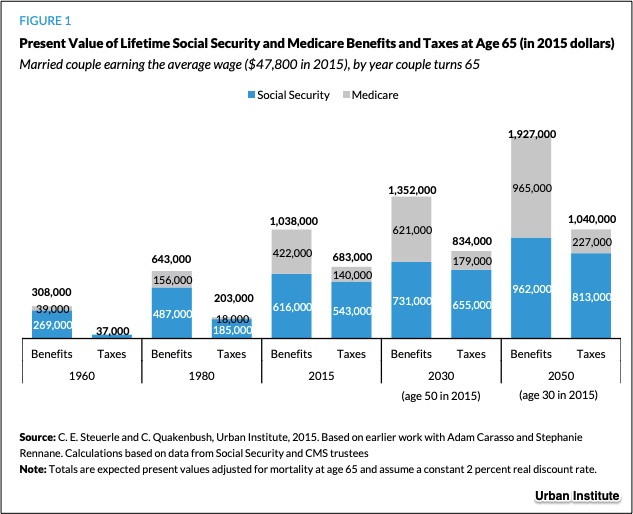 Meanwhile though, we worry about the aged. However, according to a recent study, a bigger proportion of the elderly population is wealthier than we think. The share of their income from Social Security has dropped as their income has risen.

Looking back to 1959, we see that 35% of those 65 and older were classified as below the official poverty line. In 2017, it was 9.2%. In 2016, one-quarter of all elderly households were in the richest fifth. The message from these statistics and others is that some of the elderly are living on the edge but many are not.

Whereas elderly incomes have risen substantially, the incomes of full time working families barely budged between 1990 and 2012. For millennials (born between 1981 and 1996), the problems could relate to fewer defined benefit pensions and lower rates of home ownership. Add to that student debt and wage stagnation and you wind up with lower retirement savings.

I might sound heartless but as economists we should note the tradeoffs. When we delay a Social Security fix, we shift more of the burden to the future. Not funding the system now means less for future retirees, higher payroll taxes, waiting longer to retire.

Born between 1981 and 1996, millennials will experience that rapidly descending black line in the graph. At the same time the silent generation (born 1925-1945) and baby boomers have a respectable return–until the trust fund runs out: 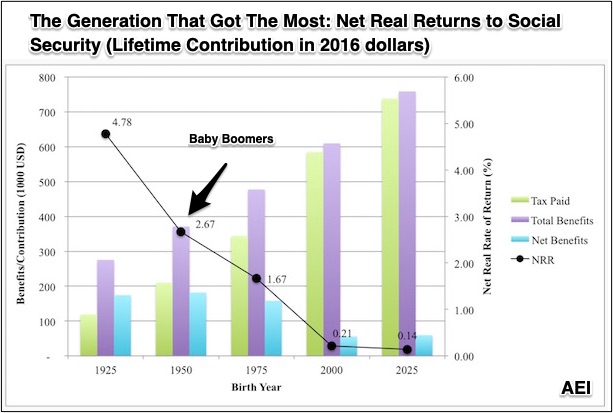 I should add that the numbers are debatable but the conclusions are not. The earliest Social Security recipients had the highest return. Its future beneficiaries will have the lowest.

The tradeoff? We are entirely funding an aging cohort now at the expense of younger generations.

My sources and more: Robert Samuelson’s columns, here and here were the perfect introduction to the current state of Social Security. From there, the Urban Institute discussed the program’s generational implications and then this menu of future policy options was the perfect complement.