Perhaps we intuitively know that cash matters. However, through a real life case study, researchers proved that it really does.

They took a look at what happened after India declared 86% of its existing currency was illegal.

On November 8, 2016 at 8:15 p.m. India named the rupee notes that were leaving their money supply. While the notes could not be used for any transaction after midnight, the deadline for returning the currency was December 31st. Since secrecy prevented them from issuing the replacements beforehand, immediately the total cash in circulation plunged by 75%.

Below, do compare the right and left bars to see the disproportionate impact of eliminating the larger notes: 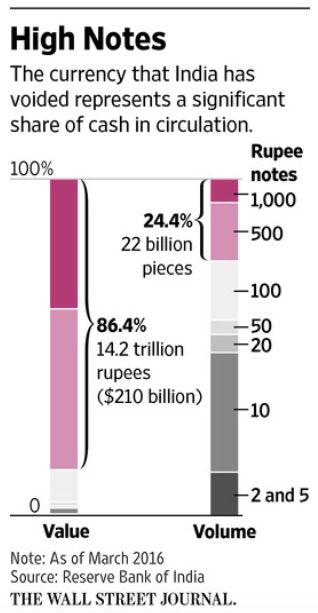 India’s demonetization provided the perfect opportunity to see if cash matters. Because other monetary variables like interest rates remained stable, researchers had a real life experiment where they could focus on the cash. To get some answers, they tried to correlate a plunge in the supply of cash with economic activity.

They knew that the median drop in the currency supply was 42%. However, the decrease varied from district to district and the arrivals of the new notes were random.

As for economic activity, their sources included satellite images of human-generated nightlight and employment data. The satellite images let them gauge commercial activity as did the employment numbers. They wound up comparing districts and time frames.

Their conclusions? In districts where cash was most scarce, real economic activity plummeted the most. The absence of cash even depressed economic activity when local residents switched to debit cards and e-wallets.

Including rectangular pieces of paper, checking accounts, and seashells, money can be tangible or virtual. But for people to believe their money has value, it needs three basic characteristics:

Knowing the characteristics of money, the Indian government just needed to say that India’s 500- and 1000- rupee notes would no longer be a medium of exchange.

Our sources and more: This NBER paper has all you need to know about India’s demonetization. Then, these WSJ graphs came in handy. And finally, you might enjoy taking the leap to an 18th century French demonetization and a paper from Kenneth Rogoff.

Please note that parts of Our Bottom Line were published in a past econlife post. Our featured image is from Wikipedia.

Why Grandma is Smiling