Five years ago I complained that my new LG washing machine was more expensive than it should have been.

In a new paper economists detail what has happened to washing machine and dryer prices.

Our story starts with the U.S. appliance maker Whirlpool filing an antidumping complaint against Korea and Mexico in 2011 and China in 2015. That just meant they objected to prices that were below the machines’ fair value. The logical solution was a duty that made the washers from those three countries more expensive. Responding, the manufacturers relocated to Vietnam and Thailand.

Next, in 2017, Whirlpool complained that washing machine imports were a threat. The United States International Trade Commission agreed and said yes to tariffs that would start at 20% for the first 1.2 million imported washing machines (not just LG) and to 50% for any more. Then, during years two and three, the tariffs will diminish.

At this point, we have a second round of relocations but this time to the U.S. During January 2018, a new Samsung factory opened in Newberry, South Carolina. And this year, LG is opening its facility in Clarksville Tennessee. Combined, both initiatives and some Whirlpool hiring will create close to 1800 jobs.

So we have new jobs and plants in the U.S. that can charge less by avoiding the tariffs. Yes?

It did not quite work out that way.

Washing machine prices are way up. Depending on the maker, the increase could be anywhere from 5% to 17%. Somewhat mysteriously, dryers (with no new tariffs) also were up an average of $92.

In just one year, consumers will pay $1.542 billion more on their washing machines and dryers while the U.S. government gets much less– $82 million– in tariff revenue. When we divide the number of new jobs by the consumer cost, the price tag is a whopping $817,000 per job.

You can see below that the washer and dryer prices were up but not the other appliances: 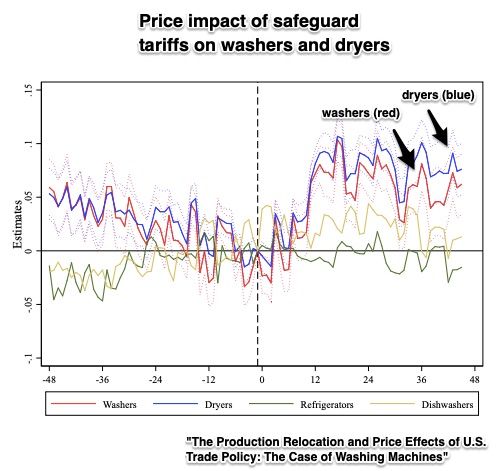 Tariffs create new incentives. They encourage businesses to relocate and raise prices. They can result in fewer jobs elsewhere when consumers have less to spend.

So, who was the biggest loser of the washing machine trade war? You and me.

My sources and more: The new paper from the University of Chicago is the perfect example of the impact of a tariff. But, if you want a much shorter version, so go to The NY Times. Please note that several of today’s sentences were in a past econlife post on washing machine tariffs.

Do You Live Where You Should Sleep More?

A New Way to Look At Air Rage