This is a three-part trade story that has no ending.

We start in New Madrid County, Missouri. At the local aluminum plant, the human resources officer has been busy hiring. Closed in 2016 because of plunging aluminum prices, a disastrous leveraged buyout, and electricity problems, the factory has a new tariff-fed life. From a skeleton crew of nine, it will have 465 job openings.

At the same time in the same place, soybean farmers are cutting back. Expecting prices to plunge, farmers have been rushing to sell their crops now. Correspondingly, DuPont Pioneer, Archer Daniels, Riceland Foods–the list is longer–have all been diminishing their activity in this Missouri County because of China’s retaliatory tariffs and the response from Mexico and Canada.

To all of this we can add $12 billion. Recognizing the impact on farmers, President Trump announced a subsidy that would help farmers endure the impact of the tariffs. While I could not find the details, the plan reputedly combines direct payments with surplus purchases. A third prong is trade promotion.

Each approach has already been used. If they turn to the Commodity Credit Corporation, then a 1933 Depression era payments program would be resuscitated. Similarly, most of us remember how the Agricultural Adjustment Act paid farmers to destroy crops. And we have existing commodity support programs that buy surplus crops and then sell them abroad or give them to food banks. All are possibilities that could entangle everyone in a blitz of red tape.

Although Reuters said that New Madrid County, Missouri residents don’t talk abut tariffs, their community is potentially divided. Depending on how the subsidies are paid,  that split could get bigger. I keep thinking that the details of distributing $12 billion within two months are daunting. 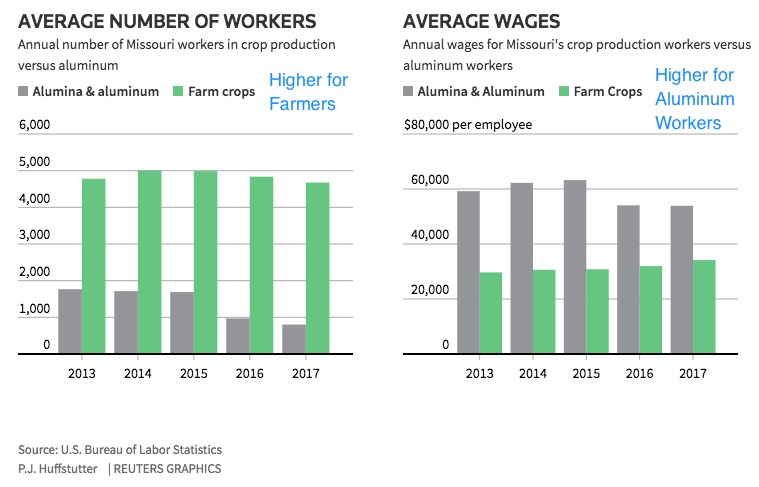 Furthermore, pondering where that $12 billion will come from, the media tell us the Treasury can loan up to $30 billion (without Congressional approval) to the agency (USDA?) that manages the programs. But what about our burgeoning deficit? The debt?

Also, it is possible that we are violating WTO  (World Trade Organization) rules. I took a look at the WTO Agriculture Agreement. Because its goal is to minimize policies that distort trade and because it prohibits certain subsidies, the Trump initiative is suspect.

So, as was true when early Trump tariffs upset Maine’s lobster fisherman, the only predictable parts of a trade war are its unintended consequences…

My sources and more: Thanks to FT’s “Free Lunch” for alerting me to this Reuters article about one Missouri community. From there you could read the CNBC  and Vox emergency aid discussions. But most valuable always was the Peterson Institute’s Trade Talks podcasts. (You really don’t want to slog through this WTO document.)

How We Use Our Time

How a Ketchup Tariff Spreads