How a Ketchup Tariff Spreads

Our recent look at a NAFTA burger revealed that we import meat from Canadian cows that were fed with U.S. corn. The bun could have had Saskatchewan wheat and a slice of tomato from Mexico.

But we make the ketchup here. And send a lot of it to Canada.

Ketchup is really catsup. But Henry John Heinz spelled it with a “K” to distinguish his product from all others. The year was 1876.

What makes ketchup special (or not so special) has made it the iconic American condiment. Easy, practical, rather sweet, and pretty adaptable, ketchup is all-American. It is easy to ship and has an indefinite shelf life. Alone, ketchup can be a quick fix for an omelet or a hamburger. Mixed with other ingredients it becomes barbecue sauce, cocktail sauce, Russian dressing, and meatloaf. You get the picture.

Canadians have even created ketchup cake:

And this is where the tariff enters the picture.

As the destination for more than half of U.S. ketchup exports (2016), Canada sells a lot of America’s ketchup. Now though, Canada is responding to the U.S. tariffs on Canadian steel and aluminum through tariffs of their own. With ketchup one of their targets, the goal is to redirect demand to French’s and other made-in-Canada products.

An economist would say that an import tariff is really a tax on exports.

The basic idea is logical. When Country A pays for its imports, that money goes to Country B because it made them. As a result, Country B has enough to pay for whatever it imports from Country A.

Tariffs encourage nations to spend less on imported goods and thereby provide less money for others to pay for their exported items. (When you explain all of this, just mention Abba Lerner’s 1936 Learner Symmetry Theorem to complete the explanation.)

Below, you can see a century of exports and imports moving in tandem as a share of the GDP: 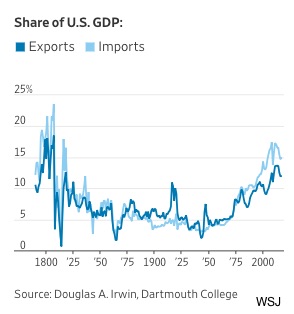 So yes, a ketchup tariff has a spread that reaches far beyond a burger.

My sources and more: Thanks to FT for alerting me to the ketchup wars. However, mixed with some history and worldwide trivia, the best article was from the Chicago Tribune. Then, the Pittsburgh-Post Gazette and CBC had more detail and WSJ‘s Greg Ip had the analysis. Finally, if you still would like to read onward, this paper has the academic perspective.