How a Steel Tariff Creates a Lobster Trap

Lobsters now travel far from home…by plane. The goal is to reach a destination as quickly as possible. Especially when the lobsters are traveling from North America to China, the faster the trip, the higher the survival rate.

In 2017, many more of Maine’s lobsters went to China. The reasons were tariffs and trade deals.

Our story starts in Canada where lobster exports are up. Because of a new trade agreement between Canada and the European Union (CETA), Canadian lobsters are 8% cheaper. At Nova Scotia’s Gidney Fisheries, cheaper lobsters mean more sales, more workers, and new equipment.

Understandably, Maine’s lobster fisherman are worried. Yes, the Canadian trade deal has pulled their sales down. However, Asia’s growing appetite for lobster could bring it back up. One key is demand from China’s aspirational middle class consumer.

Below, you can see how Maine’s lobster sales have seesawed from Europe to Asia: 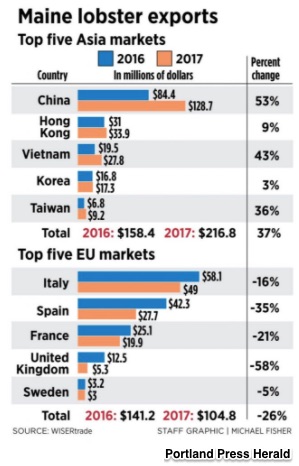 However, nothing is ever as easy as it sounds. The lobsters are having a tough time making the long trip to Asia. And the Asians don’t even want the smaller lobsters that the Europeans prefer. Add to that Canadian competition for Maine’s Asia market and their new free trade agreement with South Korea. The U.S. also has a free trade agreement with South Korea but the Trump administration wants to renegotiate or “scrap” it.

You can see why Maine’s lobster fisherman are worried. The industry and the state are even funding lobster shipping survival research.

A behavioral economist might say that we have some signaling going on. No, the Trump administration did not say it would levy a lobster tax. However, when they said let’s renegotiate NAFTA, when they withdrew from the TPP, and when they rather precipitously levied steel and aluminum tariffs, they sent a signal to the world. That signal said trade wars were okay.

And, when trade wars become the norm, Maine’s lobsters will be caught in the trap.

My sources and more: Because, like politics, all trade policy “is local,” I was delighted to have found the NY Times  story on Gidney Fisheries. Then, flipping to Maine’s side, the Portland Press Herald, here and here, was ideal.

The Mystery of the STEM Paradox

How to Know If You Are a Millennial